Europeans entering the southwest Pacific in the late nineteenth century set in motion many changes among the islanders. Fijians attempted to create new forms of political organization out of what had been an array of often-warring chiefdoms. Increased numbers of Europeans and Americans settled in Fiji to pursue commercial and other interests. Conflicts among settlers, and between them and their Fijian hosts, presented a threat to the new political system. This led the ruling chiefs to seek British protection. In 1874, the chiefs signed a "Deed of Cession," making Fiji a British crown colony. This colonial status continued for nearly 96 years. Within five years of secession, the first group of laborers was imported from India to work on the emerging sugar plantations. By 1916, when importation of workers ceased, more than 60,000 men, women, and children had arrived in Fiji.

Many social changes, including increased militancy by Indo-Fijians, resulted in new elections in 1963. For the first time, all adults were given the right to vote. Two years later, two political parties had emerged as strong forces. The National Federation Party (NFP), associated with Indo-Fijians, called for independence and a common electoral roll rather than contests based on ethnicity. The Alliance Party, seen as the party of native Fijians, favored gradual political change and continued ethnic or communal voting. These parties continued to dominate national politics after Fiji achieved its independence in October 1970.

In 1985, Fiji's national politics changed forever with the formation of the Fiji Labor Party (FLP). The FLP boasted of its genuine multiethnic nature, dominated by younger, less conservative Fijians and Indo-Fijians with close ties to labor unions. Though the FLP had been critical of NFP leadership, these two parties formed a coalition, headed by native Fijian Timoci Bavadra, to contest the 1987 general election. Although this coalition won 28 seats, its electoral victory was short lived. On 14 May 1987, Sitiveni Rabuka, a lieutenant colonel in the Royal Fijian Military Forces, led a bloodless coup with the stated goal of restoring Fiji to the Fijians. A series of interim governments resulted in a second Rabuka-led coup in September 1987. After this action, Rabuka declared Fiji to be a republic and asked the former Alliance leader and prime minister, Kamisese Mara, to serve as prime minister of a new government. This government ruled Fiji from December 1987 until 1992.

In 1990, a new Constitution was formally promulgated that was clearly designed to strengthen the political dominance of native Fijians. It created a new House of Representatives of 70 members: 37 Fijians, 27 Indo-Fijians, 5 general electors, and 1 Rotuman from an island of Polynesians in the archipelago. All voting was to be on a purely communal or ethnic basis—Fijians and Indo-Fijians could only vote for representatives of their own group. Electoral boundaries were redrawn so that only five of the Fijian electorates were in urban areas. This reduced the voting strength of urban Fijians who had supported the FLP in 1987. The Constitution provoked considerable debate, and a number of new political parties were formed, including the Soqosoqo ni Vakavulewa ni Taukei (SVT) which claimed to represent native interests. In the 1992 general election, this party won 30 of the 37 Fijian seats, but could only form a 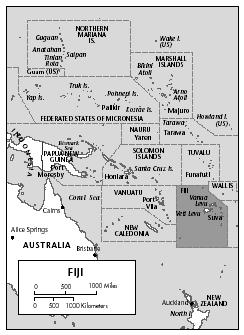 government in coalition with other parties. This party chose Rabuka as prime minister.

Political unrest that followed the 1987 coup had serious repercussions. Fiji lost its membership in the British Commonwealth of Nations. Many Indo-Fijians, including a number of educators, civil servants, and businessmen, immigrated to other countries. Tourism suffered and the nation was the object of international criticism. In 1995, a Constitution Review Commission was established to create a system that could deal with these and other issues. This commission spent almost two years at its task and achieved a success that, in terms of positive response within Fiji and internationally, could not have been imagined a decade earlier. Its recommendations were unanimously adopted by Parliament in July 1997.

The new Constitution created a system that avoids purely ethnic politics and at the same time takes into account the concerns of the native Fijian community. It specifies that the president must always be a native Fijian and gives considerable recognition to the Great Council of Chiefs. The Council not only nominates and participates in electing the president, but also has responsibility for all matters relating to native Fijians. Parliament consists of two houses. The lower chamber, the House of Representatives, where all legislation must originate, has 71 members. Of these, 46 seats are communal: 23 are reserved for Fijians, 19 are reserved for Indo-Fijians, 3 are reserved for other ethnic groups, and 1 for the constituents of the Council of Rotuma. The remaining 25 are open seats, contested on a common roll basis without any reference to ethnicity—either for the voters or for the candidates.

The president appoints as prime minister the member of Parliament who commands the majority support in the House of Representatives. The Constitution also provides for mandatory power sharing in cabinet. Any party with more than 10% of the seats in the House (eight) can be invited to join the cabinet in proportion to the number of seats it holds. The upper house, the Senate, consists of 32 appointed members: 14 nominated by the Great Council of Chiefs, 9 by the prime minister, 8 by the leader of the opposition, and 1 by the Council of Rotuma. Parliament serves a maximum of four years after a general election, though it can be dissolved by the president, acting on the advice of the prime minister.

A year later, in May 2000, gunmen led by ethnic Fijian nationalist George Speight took Chaudhry and most other members of Parliament hostage in the parliament building. The takeover remained at standoff for eight weeks. Because he was incapable of leading, Chaudhry was removed from office while still a hostage. Finally the Fijian military negotiated a release of the hostages. (Speight, however, was soon afterward arrested for violating the terms of the agreement. He was later tried for treason, convicted, and given a life sentence—remarkable considering that just before his sentencing Qarase's government amended the Constitution to abolish capital punishment.) In July 2000, the military and Great Council of Chiefs named former banker Laisenia Qarase interim prime minister and head of the interim civilian government. A new constitution was then drafted by a constitutional review commission.

I would strongly suggest that this type of information that i am looking for ie the political history of Fiji before the Deed of Cession took place.Its an assignment so please do something about it please please please.
3
Vani

I need help I need to know why was it so important to gain power at that time. And what was the need of doing a coup.