Since the 1930s, the military had been the primary source of authority within El Salvador. For 60 years, its power over Salvadoran political life was nearly absolute. The armed forces operated with a high degree of independence and internal loyalty—a loyalty forged through the tandas (cohort) system of military education and promotion. This loyalty transcended even that given to the country's president. Since the end of the 12-year civil war in 1992, the military has been drastically scaled down, largely purged of human rights abusers, and essentially removed from politics.

Even so, the transition to a broad-based democracy and thriving economy is far from being achieved. Corruption and violence, particularly against peasants, have been the hallmarks of Salvadoran society for centuries. The introduction of coffee into the country during the 19th century established the social structures that still exist today. Land has been, and continues to be, a primary issue. Land ownership has been concentrated in the hands of a few, with the consequence that the livelihood of the vast majority of Salvadorans has been subject to the whims of the wealthy landowners. Throughout the 20th century, an iron-fisted oligarchy—the so-called "fourteen families" that control coffee production—have dominated the Salvadoran economy and political system in concert with the military.

During the 1960s, there was a small opening in Salvadoran political life when middle class reformist politics (in particular the Christian Democrats) began to participate in the political process. This opening was abruptly shut in 1972 when the military stole the election from Jose Napoleon Duarte and Guillermo Ungo, who were sent into exile. Other moderates were systematically killed. Salvadoran society became increasingly polarized and anti-government guerrilla movements began to form. In 1980, these groups coalesced into the Frente Farabundo Martí de Liberación Nacional (FMLN), and civil war broke out. The horrors of this war were not confined to military clashes. The Salvadoran military had also formed clandestine "death squads" that indiscriminately tortured and killed. During the course of the 12-year war, more than 75,000 civilians—including mayors, union leaders, teachers, health care workers, priests, religious workers, and the country's archbishop were murdered largely, but not exclusively, by government security forces.

Over the 12-year period of civil strife, the United States poured nearly US $6 billion in military aid into the country, and funded candidates, parties, and processes in a series of "demonstration" elections. By the mid-1980s, this aid made El Salvador the second highest per capita recipient of U.S. aid in the world. For several years running, this aid equaled US $1.5 million a day and constituted half of the entire budget of the Salvadoran government. United Nations-brokered negotiations led to the Peace Accords signed on 16 January 1992 in Chapultepec, Mexico.

El Salvador operates under a 1983 constitution, the Pact of Apaneca. Engineered by the U.S. government, it was an attempt to establish common ground among El Salvador's ideologically disparate political parties, based on principles of representative democracy. The head of state is the president, elected independently of the Legislative Assembly to one five-year 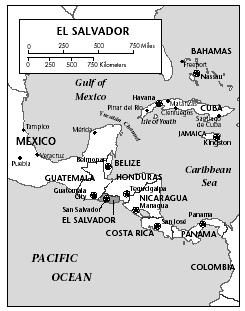 term. The national legislature is a unicameral Legislative Assembly, expanded from 60 to 84 members in 1991 in order to give smaller political parties more opportunity to gain access to the legislative process. The Assembly now consists of 64 locally and 20 nationally elected deputies simultaneously chosen every three years. The country is divided into 14 departments, which are subdivided into 262 municipalities. The municipalities elect mayors every two years.

Although seven political parties nominated candidates for the office of president in 1999, four are primary. The incumbent party is the Nationalist Republican Alliance (ARENA), a right-wing party founded in 1980 as a coalition of the military and the country's economic elite. It is well financed and highly organized. The leadership is well educated and bilingual. The former president, Armando Calderon Sol, represented a more moderate wing of the party.

The newest party, and ARENA's principal rival, is the Farabundo Marti National Liberation Front (FMLN), whose political base is primarily among the poor. Formerly the name of the leftist guerrillas, they kept their name after the peace accords were signed in 1992. Although the FMLN had been gaining popular support over the last five years, divisions surfaced during the nominating process and blunted its effectiveness. Some wanted to follow more radical, Marxist policies. Others were more moderate pragmatists who have taken on issues such as tax policy and public safety.

The Christian Democrats (PDC) is a centrist party based largely in the country's interior. However, during the 1980s they became associated with widespread corruption and economic calamity. Their support has steadily dwindled. The United Democratic Center (CDU) is a left-of-center party of reform-minded members, based in the large urban centers, with ties to various labor and popular organizations. Except for ARENA, the organizational state of the political parties is rather poor.

wow. very useful information, yet so little-known. Thank you for publishing such great material!! Will really help for my country research project.