Alkatiri, who has been described as an introspective person, has insisted that he would rather be an academic than a politician. Nonetheless, he is considered a strong negotiator 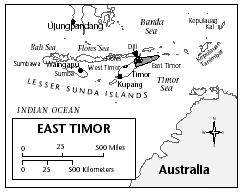 with a realistic grasp of economic necessities. Alkatiri is respected as a founder of the independence movement. His critics consider him much less-suited for democratic give-and-take than for the one-party (Fretilin) rule. In his first months in office, he clearly favored his Fretilin party members for public positions, and appeared to operate as a one-party, rather than consensus-seeking, leader. His supporters believe that he is more flexible than that, while remaining a staunch defender of East Timor's rights who is not intimidated by larger countries.

During the first months of independence, friction between Alkatiri and Gusmao became more and more open. Late in 2002, Gusmao demanded that Interior Minister Rogerio Lobato be dismissed for "incompetence" related to rioting in Dili, and Alkatiri refused to do so. The opposition Democratic Party became openly critical of Alkatiri and his party. Democratic Party leader Fernando de Araujo claimed that "Fretilin is failing to answer the people's aspirations and they have lost the confidence of the people." Riots in December 2002 were interpreted by many as a sign of deep popular discontent with Alkatiri's leadership.