The new government in 2000 faced numerous problems: education and youth training, persistently high unemployment, lack of health care, an inadequate infrastructure, and a continued dependence upon agriculture as the world market for agricultural products underwent significant changes. Like his predecessor, Charles faced heavy indebtedness and a slumping economy. The unemployment rate had not fallen below 20% since the 1990s; in 2000 it was 23%.

Despite efforts made in 2000—such as the inauguration of an express airline to transport tourists to Dominica—by Charles's predecessor, Prime Minister Rosie Douglas, the country's tourism market was stagnating in 2001–02. In February 2002, Charles warned Dominicans to expect serious austerity measures to help the economy recover in the wake of the dramatic downturn in tourism being experienced worldwide following the 11 September 2001 terrorist attacks on the United States. In response to these austerity measures, Dominicans protested, staging massive demonstrations. In May 2002, Charles named representatives from nongovernment organizations to a special Economic Stabilization Consultative Group, with the challenge of preparing a plan to get the country's economy turned around.

Besides trying to adjust to lower tourism revenue, the administration in 2002 was investigating any and every 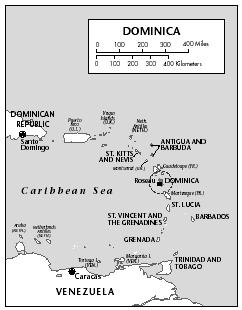 possible option to reduce government spending and increase government revenues. The downturn in tourism, coupled with a changing world market for bananas, stressed the government budget to an unacceptable level. The International Monetary Fund (IMF), the World Bank, and the Eastern Caribbean Central Bank (ECCB) joined together early in 2002 to urge Dominica to take measures immediately to shore up its economy. Among the measures considered was raising the retirement age for public servants from 55 to 60, to cut down on the expense of government pensions. The 2002–2003 budget included a 4% tax on all salaries that took effect 1 July 2002, and 5% taxes on telephone service, television service, and most petroleum products. The organization, Consumers Against High Utility Rates (CAHUR), warned the government that poverty-stricken Dominicans were simply unable to pay the new taxes.

Dominica's economy, like the economies of most of its neighbors in the Caribbean region, was in a serious recession as of 2002. GDP continued to decline, by more than 4% in 2002, with all sectors of the economy affected. Bananas, a staple of the economy, faced stiffer competition after the 1999 World Trade Organization (WTO) decision to force European Union (EU) member countries to phase out preferential trade terms for the former colonies. The economic downturn at home was further aggravated by the fact that many Dominicans, accustomed to relying on payments sent home from relatives working abroad, found that their relatives were suffering similar economic pressure elsewhere in the region and around the world.

Since 1979, the government of Cuba has offered full scholarships to hundreds of Dominican students wishing to pursue advanced degrees in medicine, engineering, agriculture, and architecture at Cuban universities. In turn, the Dominican government has paid an annual stipend of around US $900 to each student, amounting to US $240,000 in 2000. In 2002 the government was considering the elimination or reduction of these stipends.