Ismail Omar Guelleh, the nephew of former president Aptidon, was born in 1947 in Dire-Dawa (Ethiopia) to Omar Guellah and Moumina Rirache of the Issa ethnic group and Mamassans clan. During his youth, Guelleh attended a primary school based on Koranic principles, first in Dire-Dawa and then in Djibouti. In 1968, he began his employment with the French colonial administration, rising to police inspector by 1970. 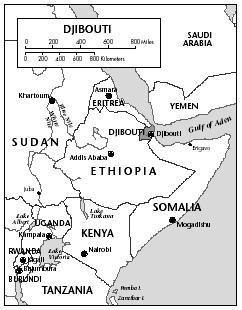 In 1975, Guelleh left his employment with the French colonial administration and became an independence activist with the LPAI, working as part of an editorial committee for Popular, a pro-independence newsletter. Later, he launched his own newspaper, Djibouti Today, pressing for Djibouti's independence.

From 1975 to 1977, Guelleh participated in several delegations abroad to negotiate for the country's independence. He visited Libya and Somalia to obtain foreign support. After independence was achieved, Guelleh became an important leader and Aptidon's chief of staff. He occupied that position for the next 22 years.

Guelleh is married and has four children.