Fogh's domestic policies are far reaching and are meant to radically reform many aspects of the Danish state, which he and the Liberal Party see as having grown too large and inefficient. Fogh seeks to create a system which is far more favorable to private-sector individual initiative by greatly reducing the tax burden on ordinary Danes. He wants to introduce private enterprise into the health care and welfare systems, but not to dismantle them. Fogh promised to introduce tough new immigration laws and to crack down on violent crime, a pressing issue for Danes who have seen their normally peaceful, law-abiding country becoming increasingly violent. By March 2002 Fogh had managed to deliver on many of his campaign promises, relying on the parliamentary support of the Danish People's Party to produce an absolute majority. The formerly ruling Social Democrats had been so marginalized by their defeat in the November elections there was little they could do to stop the center-right government from achieving most of its goals. The government had introduced new immigration laws limiting the number of immigrants and limiting immigration to only those individuals who qualified as refugees by internationally agreed definitions. Fogh's government also ended the right of families of immigrants to be granted residency automatically. New laws were passed stiffening punishment for violent crimes. Fogh also fulfilled his campaign pledge to provide more assistance to Denmark's growing elderly population. Like many countries in the developed world, the ratio of 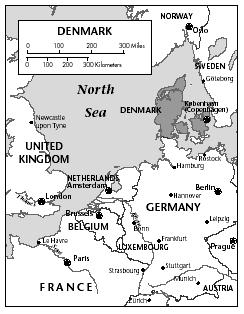 retirees to workers is growing, and it is becoming increasingly difficult to provide services to this growing population. Fogh introduced legislation providing 500 million Danish krona in new spending for the retired and also passed legislation providing for 12 months of maternity leave. Fogh has also eliminated more than 103 administrative boards and committees, reportedly saving the country US $35.5 million.