The Czech Republic and Slovakia gained independence as a unified state in 1918 at the end of World War I, with the fall of the Austro-Hungarian Hapsburg monarchy. The idea of Czech-Slovak nationalism emerged during the late 19th century and received strong backing from the victorious Allied powers, especially the United States under President Woodrow Wilson. During the inter-war period (1918–39), Czechoslovakia became the only economically prosperous and stable democracy in central and eastern Europe. Nevertheless, in 1938 the Western powers allowed for Czechoslovakia's dismemberment at the hands of the Nazis. The Czech lands were incorporated into the Third Reich, while Slovakia became an independent puppet state. In 1948, Communists seized power in a reunified Czechoslovakia. The country was ruled as a single-party dictatorship and satellite of the Soviet Union. The first attempts at resistance came during the 1968 "Prague Spring," when Alexander Dubcek introduced some democratic reforms within the Communist Party. Dubcek's effort to create "socialism with a human face" was crushed later that year by Warsaw Pact troops. The "Prague Spring" inspired the formation of several dissident groups, of which the Charter 77 Movement, led by playwright and dissident Vaclav Havel, was the most prominent.

In late 1989, the Czech and Slovak protest movement, led by the Czech Civic Forum and the Slovak Public Against Violence, swelled to many thousands. It would eventually lead to the peaceful end of communist rule in a "Velvet Revolution." Havel was named president in December 1989. Czechoslovakia's first free elections were held on 8 June 1990. The Civic Forum and Public Against Violence won impressive victories. The new government began a radical overhaul of the country. New elections, held in 1992, reinstated a center-right government. Continuing progress, however, became stalled by discord between the Czech and Slovak lands. Despite continuous popular support for the federal state, increasing differences emerged between the two most prominent politicians of the two republics, Vaclav Klaus of the Czech Republic and Vladimír Meciar of Slovakia. These differences led to the eventual split of the Czech and Slovak Federal Republic, taking effect on 1 January 1993.

Under Klaus's leadership, the newly independent Czech Republic experienced numerous economic achievements: impressive growth, low inflation, and low unemployment. In the 1996 elections, however, the center-left Social Democratic Party (CSSD), led by Milos Zeman, narrowed the gap with Klaus's Civic Democratic Party (ODS). The ODS won a plurality but lost their parliamentary majority and were forced to form a minority government. In return for support in Parliament, the opposition Social Democrats gained leadership positions in Parliament. Relations between the government and opposition remained acrimonious. In addition, the Czech economy became mired in numerous scandals that were attributed mainly to the lack of adequate regulatory controls over entrepreneurial activities. In 1997, the Klaus government introduced numerous stabilization measures. In the fall, however, after his party became linked with charges of corruption, Klaus's government resigned. President Havel appointed a caretaker government for a six-month term under central bank governor, Josef Tosovsky.

In the 1998 elections, the CSSD won a plurality of the vote and the ODS came in second, performing better than was expected. The CSSD was allocated 74 seats in the 200-seat lower house of parliament and the ODS got 63 seats. After failing to achieve a coalition agreement with other parties, the CSSD leadership worked out an agreement with the opposition ODS to form a single-party, minority CSSD government. Havel, who was reelected to a five-year term in 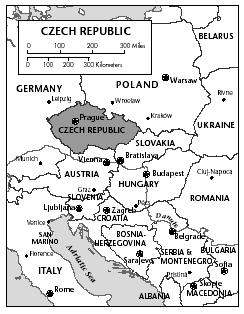 January 1998, appointed Zeman of the CSSD to serve as prime minister, despite reservations about CSSD-ODS accord.

Following the June 2002 elections, which were won by the Social Democrats, Vladimír Spidla, who had become leader of the CSSD that April, was named prime minister. The CSSD took 70 seats in the Chamber of Deputies, and entered into a coalition with a group aptly named "Coalition," consisting of the Christian-Democratic Union/Czechoslovak People's Party, and the Freedom Union. (The Coalition held 31 seats for a majority of 101 seats in parliament). The ODS finished second with 58 seats. Havel stepped down as president in February 2003, and Klaus was elected president by a slim majority in Parliament.