In the four decades that Castro has ruled Cuba, he has proven to be a skillful politician and a survivor. Castro has not only consolidated his power domestically, but has also survived many international challenges, especially from the United States. Initially Castro's revolution had widespread support not only from the Cuban population, but also from many Americans, who had been shocked by the abuses of the Batista dictatorship. (The U.S. government recognized the new Cuban government within days of its victory.)

Moreover, the first provisional government was composed of a broad coalition of forces that had opposed Batista, ranging from former Batista officials who had broken with the dictatorship to liberal and Marxist groups. From the beginning, however, Castro's "26th of July" movement was the leading group within the coalition.

In the early days of the revolutionary regime, there were numerous arrests and executions of former members of the Batista dictatorship. The new government ruled by decree and promised that elections would be held within 18 months. The government began an agrarian reform and started nationalizing industrial enterprises, most of them owned by U.S. companies. These policies were not popular with many Cubans, some of whom went into exile. The U.S. companies that had been expropriated with little compensation were, of course, also unhappy with the new regime. Additionally, Castro's nationalistic rhetoric and critical view of the previous involvement of the United States in Cuban politics further weakened relations with the Eisenhower administration. Moreover, in early 1960 Cuba signed an agreement with the Soviet Union to purchase Soviet oil in exchange for Cuban sugar. Soon afterwards the United States cut the quota for sugar imports from Cuba, and the Eisenhower administration broke relations with Cuba.

In January 1961, John F. Kennedy was inaugurated as U.S. president. On 11 April 1961, a U.S.-sponsored force of about 1,300 Cuban exiles landed on Cuba's southern coast (the Bay of Pigs) with the purpose of overthrowing Castro. The 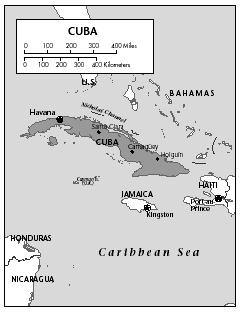 invading forces were soundly defeated in what proved to be a major embarrassment for the Kennedy administration. After the invasion, Castro consolidated his power, and in December 1961 proclaimed Cuba to be a communist state with a Marxist-Leninist program.

In October 1962, the tension between Cuba and the United States reached its highest level after Soviet missiles with nuclear warheads that had the capability of reaching the United States were discovered in Cuba. After a U.S.-imposed naval blockade and several days of tension between the super-powers, the Soviet Union withdrew its missiles and the United States agreed not to invade Cuba. After surviving this ordeal, which was considered to be the worst international crisis since World War II, Castro moved closer to the Soviet Union and other socialist countries. In 1964, his government was ostracized by Latin American countries when the Organization of American States (OAS) imposed diplomatic and commercial sanctions against Cuba.

In 1965, with the consolidation of the revolution, groups that had supported the revolution were united into the Communist Party of Cuba. In 1972, Cuba became a full member of the Council for Mutual Economic Assistance, and thus received preferential trade from the Soviet Union and Eastern European countries. Throughout this period, Castro continued to be the undisputed leader of the Cuban Communist Party and of Cuba.

In 1976, after being approved by a popular referendum, Cuba's first constitution since the revolution came into force. The same year, the National Assembly of People's Power elected the members of the Council of State with Castro as president. Since then, Castro has been reelected several times, including the election of 1998, in which no other political party was allowed representation.