Abel Pacheco de la Espreilla was born 22 December 1933 in the port city of Límon. He received his early education in 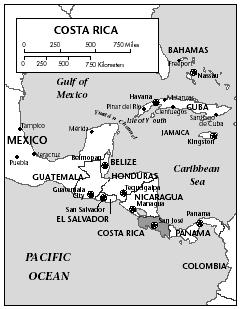 local schools, later studying medicine in Mexico and psychiatry in New Orleans, Louisiana, and in Europe. In addition to his psychiatry practice, in the 1980s he hosted the television programs "Yesterday and Today in History" and "Legend and Tradition," for which he won a Latin American television award. As a published author, he won a national literature award for his book Underneath the Skin; he also published Gentes sin ancla (People without Anchor) in 1994.

He is married to Leila Rodrigues Corrals; the couple has three daughters (Yolanda, Elsa Martha, and Valeria) and three sons (Abel, Sergio, and Fabian).