Congo, Republic of the - Leadership

Sassou-Nguesso immediately undertook to temper the course charted by previous governments. Elections for a national people's assembly were held in July 1979, and a new socialist Constitution was approved. Sassou-Nguesso promised that exiles opposed to the regime could return to the country without fear of repression. He adopted an increasingly pro-Western foreign policy and a liberal economic policy. In 1984, Sassou-Nguesso was reelected, both to the chairmanship of the PCT's central committee and to the presidency for another five-year term. Despite continued ethnic tensions and a floundering economy, Sassou-Nguesso was reelected in 1989.

The legislative elections held in September 1989 were historic. The list of candidates that was presented to the voters included, for the first time, candidates that were not members of the PCT. This was the first of many changes to come, no doubt precipitated by the dramatic changes occurring in Eastern Europe and the USSR. Two months later, Sassou-Nguesso announced a series of reforms intended to liberalize the economy, to reduce the role of the state, and to foster private enterprise.

Increased political pressure forced the Sassou-Nguesso government to abandon its Marxist-Leninist orientation. Trade union activity served to hasten the movement toward a multiparty system, and the PCT announced that political parties would be permitted to register, that a transitional government would take power in early 1991, and that a national conference would take place to decide the nation's future. In 1992 general elections, the Union Panafricaine pour la Démocratie Social (UPADS, Panafrican Union for Social Democracy) won a majority in both houses of the Parliament. Pascal Lissouba, a former prime minister and head of UPADS, succeeded in winning the presidency with 36% and 61% of the votes in successive rounds of a two-round election.

Conflict within the government quickly ensued. UPADS and the PCT attempted to form a coalition government, but the PCT left the alliance after being denied ministerial posts it had been promised. The PCT immediately allied itself with the Union Pour le Renouveau Démocratique (URD, Union for Democratic Renewal). The PCT-URD pact created a new majority in Parliament and demanded the right to form a new government. When they were unable to win an outright majority in the National Assembly, the PCT-URD leadership formed a rival cabinet and encouraged a campaign of civil disobedience, which turned violent as militias loyal to Sassou-Nguesso clashed with government security forces. Despite repeated attempts to disarm the militias, violence continued to escalate from 1993 through 1997. Combatants were divided primarily along ethnic and political lines, both among the militias and within the nation's armed forces. Brazzaville itself was partitioned into three zones, each one controlled by supporters of one of the three principal political factions: districts in the north were held by Sassou-Nguesso's supporters; those in the south were controlled by Lissouba's; and the Bacongo suburb was held by Bernard Kolelas, 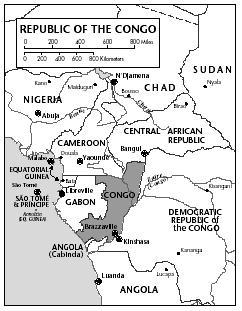 chairman of the PCT-URD coalition. For four months in 1997, Brazzaville became a war zone as these factions fought for control of the city. Most of the residents fled, and the fighting reduced the capital to a ghost town. Finally, on 15 October 1997, President Lissouba was forced to leave the country and Sassou-Nguesso declared himself to be the victor and new leader.

After being inaugurated on 25 October, Sassou-Nguesso lost no time in naming a new government, relying heavily on old allies from his previous administrations. He declared a willingness to work with anyone who severed ties to the former president. In January 1998, he established a 75-member transitional assembly. By late 1998, however, a rebellion against Sassou-Nguesso's government forces by armed opposition loyal to Lissouba and Kolelas disrupted hopes for smooth transition to democracy. This new violence caused great destruction, loss of life, and displaced hundreds of thousands of persons. However, in November and December 1999, the government signed agreements with representatives of many, though not all, of the rebel groups. The December accord, mediated by Sassou-Nguesso's father-in-law, President Omar Bongo of Gabon, called for inclusive political negotiations between the government and the opposition that would lead to a new Constitution and new elections.

It was only in response to international pressure that Sassou-Nguesso began the process of constitutional reform. The amended Constitution, finally presented and accepted by the government in January 2002, called for a restructuring of government with an elected president limited to two seven-year terms and a bicameral assembly consisting of a House of Representatives and a Senate. The amendments further specified that a candidate for president must be Congolese by birth, be within the ages of 45 to 75 on the date they register their candidacy, and must have resided continuously in the Republic for 24 months before the elections. This latter requirement essentially disqualified the candidacy of both Lissouba and Kolelas for the 2002 election. Both had been living in exile for the previous four years, having been found guilty in absentia of crimes allegedly committed during the 1997 civil war.

As a result, the only major opponent to Sassou-Nguesso in the March 2002 election was former prime minister Andre Milongo. Milongo, however, withdrew from the race after the first round of voting, citing polling irregularities and urging supporters to boycott the remaining elections. European Union (EU) observers affirmed many of the allegations. Nevertheless, Sassou-Nguesso won with nearly 90% of the vote, the first time he was ever elected to the office he had seized twice. In April 2002, the Supreme Court confirmed the election results, reporting that Sassou-Nguesso received 1,075,247 votes (over 89%) of the 1,295,319 total votes cast. Milongo announced that he would lead a newly formed coalition, Convention pour la democratie et le salut (Convention for Democracy and Security), which would enter candidates in the legislative elections.

Sassou-Nguesso's new term did not begin peacefully. Despite a ceasefire that had been signed in December 1999, Ninja rebels set off antigovernment violence two weeks after Sassou-Nguesso's reelection. The violence escalated through the year, inspiring Sassou-Nguesso twice—August and November—to issue calls for the rebels to surrender. (Following his August plea, 250 fighters surrendered, but with seemingly little effect on the violence.) An estimated 50,000 people had been displaced because of violent fighting.