Congo, Democratic Republic of the - Rise to power

Joseph Kabila rose to head of state from virtual obscurity. In 1996, he was called by his father to join the fight to 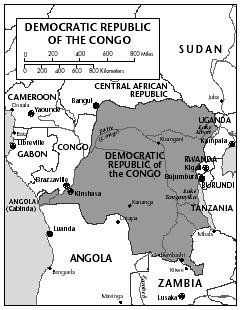 overthrow President Mobutu Sese Seko. Laurent Kabila sent him to China for military training from which he returned in six months to participate in the offensive against Mobutu. Subsequently, he was promoted to the rank of major-general and chief of the armed forces. From this vantage point, Joseph Kabila led the campaign against Rwanda and Uganda and their proxies after their 1998 invasion.

One view of Joseph Kabila's extraordinary ascent to the presidency is that he satisfied the requirements for leadership, and as the son of the deceased head of state, was the least contentious choice to fill a dangerous power vacuum. Another view is that he was involved in the assassination plot, and that the assassination was calculated to spare the country from a free fall. In any case, the presidents of Angola, Zimbabwe, and Namibia met in Luanda three days after the event and agreed to increase troop levels in DROC while supporting Joseph Kabila. He was confirmed unanimously by his father's appointed Parliament to be the new head of state on 27 January 2001. In mid-January 2003 the trials of the accused for the assassination of Laurent Kabila were concluded, and despite questionable evidence, 29 people were found guilty and condemned to death.