The Republic of Chile gained its independence from Spain in 1818, and by the mid-twentieth century had become one of Latin America's most advanced and stable nations. In 1970, Chileans elected to the presidency Salvador Allende Gossens, an enthusiastic Marxist who represented a coalition of five left-wing political parties, and for the next three years, Chile had a socialist government. Repeated violent clashes between pro-and anti-government forces, as well as covert U.S. intervention against the Allende government, led to chaos and a deteriorating economy. Allende's government was overthrown on 11 September 1973 by the Chilean military, with help from the U.S. government and significant support from Chile's middle and upper classes. The military formed a four-man junta government composed of the commanders-in-chief.

General Augusto Pinochet Ugarte, commander-in-chief of the army, soon came to dominate the other three. All political activity was banned, the National Congress was dissolved, and censorship and repression followed. Pinochet proclaimed himself president in 1974 but ruled Chile as a ruthless dictator for the next 15 years. Pinochet's goals were the eradication of socialism and the construction of a modern capitalist nation-state. Those unfortunate Chileans who opposed the dictatorship faced the possibility of imprisonment, torture, and death. Several thousand were murdered, while thousands of others were exiled. Opposition to Pinochet, however, continued throughout his rule. Pinochet gave signs of retaining power indefinitely, but national and international pressure to return the country to democracy continued to increase through the 1980s. In Chile, key political alliances between former foes led to a more unified voice against the dictatorship.

By 1988, Pinochet was forced to hold a national plebiscite—a yes or no vote on whether he should remain in office. Pinochet was confident that he would stay in power, but Chileans overwhelmingly voted to return Chile to democracy. The plebiscite led to presidential elections in 1989, with the right-wing candidate closely allied to Pinochet. Patricio Aylwin Azocar, the respected candidate of the Partido Democracia Cristiana (PDC—Christian Democrats) was backed by a center-left coalition of parties that supported a return to democracy. The coalition, known as the Concertación para la Democracia (Concert of Parties for Democracy), brought together an unlikely alliance of former political foes like the PDC and the Partido Socialista (PS—Socialist Party). The politically important Partido por la Democracia (PDD—Party for Democracy), an amalgamation of reformed leftists and centrists, was also part of the Concertación.

Aylwin, the country's first freely elected president since Allende, was inaugurated in March 1990. His election was hailed as a victory for democracy, but Pinochet's power had not diminished at all. During his regime, Pinochet helped write a new Constitution that favored the military with unprecedented independence. The Constitution, promulgated in 1981, came into full effect in 1989.

Under the Constitution, Chile has three official branches of government: the executive (president), the legislative, and the judicial. The president is elected by direct popular vote to a six-year term and is not eligible for reelection. The bicameral legislature consists of a 48-seat Senado (Senate) and a 120-seat Camara de Diputados (Chamber of Deputies). The judicial branch consists of the Supreme Court, which has 21 judges appointed for life by the president. When the court has a vacancy, the judges submit five names to the president from which the president must make his appointments. A two-thirds vote in the legislature is needed to change the Constitution.

Pinochet also had named key allies to just about every important position of power in Chile, from university presidents to Supreme Court judges. His political maneuvers allowed him to remain head of the armed forces until 1998 when, as dictated by the Constitution, he became a senator for life. The Constitution also had allowed Pinochet and his allies to name eight senators for life who were sympathetic to the military. These senators prevented Congress from reaching the two-thirds majority needed to make constitutional reforms.

Because of these serious obstacles, Aylwin and the Concertación were unable to return Chile to complete democracy, but Chileans respected them for trying. Aylwin retired on 11 March 1994 with an approval rating of more than 50%. Eduardo Frei Ruiz-Tagle, another Concertación candidate, was elected to the presidency in 1994. Frei, also a member of the PDC and son of former president Eduardo Frei Montalva, took office with promises to spend more to help the poor. The military, with occasional threats from Pinochet, continued to assert its independence.

Economically, the country continued to improve under the Concertación presidents. Aylwin had promised not to alter the basic market-oriented economic structure developed under Pinochet, and that promise was kept. Also, nations that had not been willing to do business with Pinochet flocked to invest in Chile under the new government. The wine, agriculture, and tourism industries flourished during the 1990s, and the economy continued to expand at a high rate until late 1998–99 when the Asian economic crisis, lower prices for exports, and a decrease in tax collections led to a fiscal crisis.

In October 1998, the arrest of Pinochet in London on charges of human rights violations shocked Chileans and spun the Frei administration into a serious crisis. The military demanded Pinochet's return and pressured Frei's government to break relations with England and Spain, since both countries sought to bring charges against the former leader. After holding Pinochet in detention for 16 months, the British government released him, citing health and humanitarian reasons. Pinochet returned to Chile in March 2000 to a different political climate. Aged and disgraced by the detention, Pinochet had become a political liability even for the right. 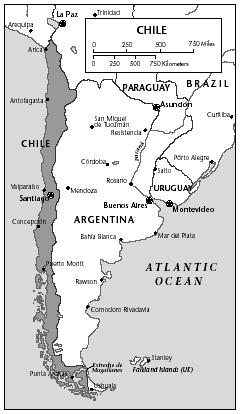 Ricardo Lagos, newly elected Socialist Party candidate, was inaugurated president just a few days after Pinochet's return. Lagos immediately called for a new Constitution and major political reforms. In the meantime, Pinochet was facing nearly 80 separate charges of human rights violations in Chilean courts. In 2002, the Chilean Supreme Court ruled that Pinochet was mentally unfit to stand further prosecution. A day after that ruling, Pinochet resigned from the Chilean Senate.

this helped me to do my project for spanish!!!
thanx for putting this up!!!
very helpfull.
2
Rodolfo Castro

i need to no more about Pinochets polotical allies