Déby's ability to lead Chad has been impaired by his unconvincing mandate at the polls. Considering the votes received by other candidates and abstentions, Déby only received one-third of the possible votes in the 1996 elections. In the May 2001 elections, Déby was reelected with 63% of the vote. He is relatively unpopular among Chadians, partly due to regionalism and the cultural, language, and religious differences that arise in a country of this size undergoing nation-building.

In addition to the challenges of governing a highly pluralistic state, Déby was faced with reducing the size of the armed forces from over 40,000 to 25,000 soldiers. Because the army had been his key source of support, its reorganization was considered a test of Déby's commitment to civilian government. However, insurgencies in the north and south, and elections-related civil unrest led Déby to adopt an authoritarian style of rule subjecting the opposition to harassment, detention, and imprisonment, and undermining freedom of the press.

Predictably, opposition to Déby's autocratic style has been growing, but Déby is unlikely to jeopardize his power by reforming Chad's unitary political system with its imbalance 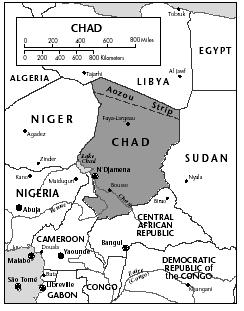 of power between the executive and legislative branches and partisan judiciary. The success of the Doba oil project—so critical to revitalizing the impoverished economy—depends on Déby's ability to establish an alliance between government and political leaders of the south that will satisfy demands for revenue sharing and enhance prospects for peace and stability. Although the project had experienced delays, Chevron Texaco announced in early 2003 that the oil project in Chad and a related pipeline project in Cameroon would be operational by the end of the year.