Ange-Felix Patassé, born 25 January 1937, comes from Ouham-Pendé, the northwest border region. He is a member of a small ethnic group called the Sara. People of Saga origin, along with the larger ethnic groups of the Baya and the Banda, had long been excluded from political power by the minority, but politically influential, Riverine people. Given these historical conditions it is remarkable that Patassé was able to enter the civil service in his twenties and rapidly advance into higher levels of authority. Patassé was dismissed from the government in 1978 and left the country for France in January 1979 to form an opposition to the Bokassa regime. He returned shortly after the coup that removed Bokassa but was arrested trying to leave the country in November 1979. 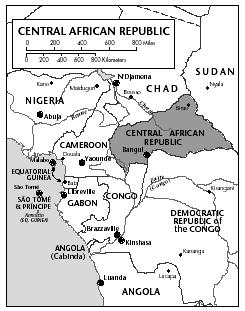 Along with several members of his family, he was jailed for a time in the infamous Ngaragba prison in Bangui, well-known for torture and mistreatment of prisoners.