Pires left Portugal in 1961 to join Cabral's Partido Africano da Independência da Guiné e Cabo Verde (PAIGC). Involved in the independence movement for Cape Verde, he served in a number of positions, including as a member of Central Committee of the PAIGC of 1965, and of the PAIGC Council of War 1967. He was re-elected as a member of the Commissão Permanenete do Comité Executivo da Luta (CEL) and of the Council of War 1970. He also was involved in the administration of liberated areas of southern Guinea-Bissau from 1971 to 1973. He was president of the National Commission of PAIGC for Cape Verde for 1973, and appointed assistant state commissioner in the first government of the Republic of Guinea Bissau in 1974. He was director of PAIGC policies during the transitional government before independence of Cape Verde in 1975.

In 1975, Pires was appointed prime minister and served in that capacity until 1991. He was elected secretary of the Partido Africano da Independência de Cabo Verde (PAICV), which replaced the PAIGC in 1981. He served as the secretary general from 1990 to 1993. He was appointed to the newly created post of party chairman in 1993. He was elected president of the party in 1997, but resigned in 2000 on announcing his candidacy for president.

President Pires was inaugurated in March 2001, after defeating Carlos Veiga in the 11 February 2001 election by just 17 votes in the second round of voting. Although the result was contested by Veiga, the Supreme Court upheld the election and confirmed Pires as the new president. In the legislative elections held on 14 January 2001, Pires's PAICV party took 47.3% of the vote, obtaining 40 parliamentary seats. The incumbent Movimento Para Democracia (MPD) followed with 39.8% of the votes and 30 seats. The Democratic Alliance for Change (ADM) took 6% and 2 seats, while other parties gained only 6.9% of the vote. 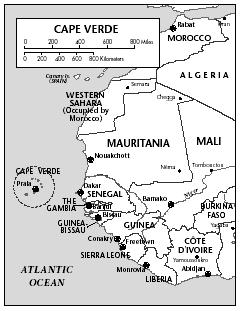