Biya's political career was directly linked with that of former president Ahmadou Ahidjo. In 1962 he served the Ahidjo government as delegate in charge of foreign missions. Five years later he was named director of the president's civil cabinet and secretary general. Promotions continued until 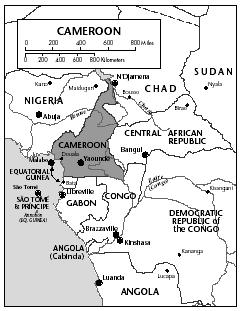 Ahidjo's resignation as head of state in 1982, for reasons of ill health, stunned the entire country. It was initially thought that Ahidjo intended to remain firmly in control as party chief with Biya acting as his puppet. However, in 1983 Biya reshuffled the cabinet and removed several longtime Ahidjo associates. The same year he announced the discovery of a coup plot and formally implicated Ahidjo, who resigned his post as party chief and retired to France. The following month, Biya was elected president of the UNC and in 1984 was elected president of Cameroon.

The new government was soon challenged by another coup attempt. Ahidjo, who lived in exile in France, was again accused of being behind the plot. Biya tightened security, purges followed, and 46 of the plotters were executed. A 1985 party congress gave Biya firm control over the party and government.