Colonized by the French and part of the French West African Federation, Côte d'Ivoire received its independence in 1960 under Félix Houphouët-Boigny. Houphouët-Boigny was a member of the French National Assembly and minister in the French government before his country's independence, and he continued to maintain very close ties with France throughout his 33-year presidency. When Houphouët-Boigny died on 7 December 1993, he was succeeded by Henri Konan Bedié, the president of the National Assembly, in accordance with the succession rules outlined in Article 11 of the nation's Constitution. He remained in power until 24 December 1999, when a military coup took place. The spark igniting the coup appears to have been the government's withholding of all wages earned by the nation's soldiers when they served as United Nations (UN) peacekeepers in the Central African Republic. The mutinying army placed General Robert Gueï in power, thus making him the de facto president. Gueï stated that he wanted to restore the country to democratic rule and hold general elections within the year. He also stated his desire to restore the dignity of the military, eroded by poor salaries and inadequate equipment, and to free the political prisoners, members of the opposition Rassemblement des Républicains (RDR—Rally of the Republicans) party who were jailed for damages caused during their political rallies. While the United States, Canada, and other nations were quick to condemn the coup, many citizens of Côte d'Ivoire reportedly welcomed it as an improvement to the authoritarianism and corruption of the Bedié regime.

Until the December 1999 coup, Côte d'Ivoire had a constitutional democracy, with a Constitution that had been amended several times. Upon claiming power, Gueï formed the Conseil National de Salut Public (CNSP—National Committee of Public Salvation) with nine senior military officers as members and himself as head. CNSP's stated goals were to create the conditions necessary for democracy and to 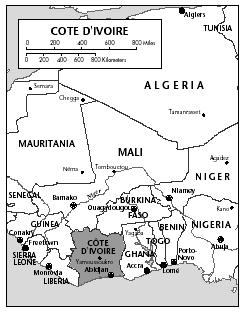 organize free elections. Gueï also created a transition government from members of the major opposition parties, and assigned it the task of rewriting the Constitution.

A referendum on the new draft Constitution was held on 23 July 2000 with voting having to be carried over to the following day. The turnout was estimated at 56%, and officially, 86.5% of the voters approved the new Constitution. Surprisingly, all parties—even Alassane Ouattara's RDR—supported the referendum despite the controversial "nationality" article, which barred anyone—including Ouattara—from being president unless their claim to Ivoirian citizenship could be proven.

Presidential elections were scheduled for mid-September 2000 then postponed until 22 October because of litigation and uncertainty surrounding the eligibility of Ouattara and Bedié, both of whom announced their intentions to run, and because of Gueï's decision to reverse his declaration not to stand for elections. In mid-September, mutineers intent on overthrowing Gueï were repelled, and the Supreme Court upheld a ban on Ouattara and Bedié, leaving Gueï and Gbagbo the two main contenders. With preliminary results showing Gbagbo leading, Gueï suspended the electoral commission and declared himself the winner. Gbagbo supporters took to the streets in a display of people's power, and rather than risk a blood bath, the army and gendarmerie (armed police force) withdrew their support of Gueï, who fled. The counting resumed with Gbagbo declaring victory with 59.4% of the votes to Gueï's 32.7%. Gbagbo's swearing in, however, was marred by violent demonstrations and street fighting between Front Populaire Ivoirien (FPI—Ivorian Popular Front) and Ouattara supporters, the latter believing their candidate was barred unfairly from running. Some 150 died in the fighting, at least 50 of whom were Ouattara supporters, their bodies dumped in an Abidjan suburb. Gbagbo refused to cave in to demands that the election be rerun, sparking several weeks of killings of northerners in Abidjan and fueling tensions between northerners and southerners.

Legislative elections held on 10 December 2000 and January 2001 gave the FPI 96 seats, the Parti Démocratique de la Côte d'Ivoire (PDCI-RDA—Democratic Party of the Ivory Coast) 94, and a moderate wing of the RDR, 5 seats. The main wing of the RDR backing Ouattara boycotted. A coup was foiled in January 2001, and political stability was given a boost in March when Ouattara's party agreed to participate in municipal elections. The elections validated the RDR's popularity across the country, even in Gbagbo's hometown, giving it 54 municipalities to 59 for PDCI-RDA, and 34 for FPA. Independents won 38 districts, but, in April, 21 of these joined the PDCI-RDA. During the fall 2001 (October–December), all four main political parties participated in a national reconciliation forum, whose (non-binding) recommendations included forming a government of national unity with representation from the FPA, PDCI-RDA, and the RDR along with other smaller parties.

Less than a year later, on 19 September 2002, rebels from the Patriotic Movement of Côte d'Ivoire (MPCI), led by Guillaume Soro, rose up in a coup against Gbagbo. Though the coup failed, the MPCI occupied the north of Côte d'Ivoire, while two smaller rebel groups—the Far Western Ivoirian People's Movement (MPIGO) and the Movement for Justice and Peace (MPJ)—held the western part of the country. The groups demanded Gbagbo step down and elections be held earlier than scheduled. A civil war ensued, until two tentative ceasefires were declared in October 2002 and January 2003. On 15 January 2003, talks were held in Paris between the three rebels groups, a government delegation, the political parties represented in the National Assembly, and the RDR. Those assembled agreed to form a government of national unity and reconciliation in which the rebels would be represented, and Gbagbo would remain as head of state, albeit with diminished powers. Ten cabinet posts were reserved for President Gbagbo's FPI; the PDCI, RDR, and MPCI each are granted 7 posts; 7 posts are shared by the MJP and the MPIGO. The first meeting of cabinet ministers in the new government was held on 17 April 2003, but fresh fighting broke out soon after. However, a total ceasefire on all fronts was agreed to on 1 May 2003.