During the decade that President Jean-Baptiste Bagaza held power (1976–87), he earned a reputation as a hard-liner. He excluded Hutu from nearly all government and military posts and outlawed public discussion of ethnicity. His ethnic extremism, intolerance of dissent, and attacks on perceived threats to his rule (particularly the Catholic Church) made him increasingly unpopular. On 3 September 1987, while 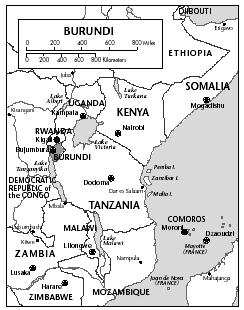 Bagaza was attending a summit of francophone states in Quebec, a group of military officers took power in a bloodless coup. The officers created a 31-member Military Committee of National Salvation to lead the country and named Major Pierre Buyoya as president of the Third Republic.

During his seven years as president, Buyoya oversaw a transition to democratic government and gained a reputation as a moderate. After losing the June 1993 elections, he voluntarily left office and insisted that his supporters back the new president. Buyoya subsequently withdrew from the national spotlight but remained influential in the military. The October 1993 coup attempt was apparently carried out by soldiers associated with Bagaza, and Buyoya's refusal to support them helped to ensure their failure.

Following Ndadye's assassination, ethnic clashes left more than 50,000 dead, but violence diminished after several weeks. The country remained relatively calm following Ntaryamira's death in April 1994, but under his successor, President Ntibantunganya, security conditions gradually deteriorated. By late 1994, both ethnic groups had formed civilian militias and had begun to terrorize Burundi's population. Militia attacks drove most Hutu out of the cities and most Tutsi out of the countryside, creating for the first time a geographic division between the two groups. The military, who remained overwhelmingly Tutsi, frequently supported the Tutsi militia, leading Ntibantunganya to declare in March 1995 that a genocide had begun against Burundi's Hutu.

Meanwhile, Ntibantunganya began to face increasing opposition from Hutu who felt he was too moderate. In mid-1994, former Interior Minister Leonard Nyangoma fled Burundi and from exile in Switzerland organized a faction called the National Coalition for the Defense of Democracy (CNDD). A military wing of the CNDD operating out of DROC began to launch guerilla attacks on Tutsi communities in northern Burundi. In 1996, CNDD attacks on Tutsi gradually spread throughout the country, and the military responded with increasing repression against the Hutu population. With violence spreading and becoming more intense, rumors surfaced in mid-1996 of a potential military coup, possibly to be led by former President Bagaza. Buyoya, who was in the United States preparing to teach at Yale University, evidently planned his coup to preempt action by Bagaza's supporters. While in the United States, he apparently gained promises of international support, based on his reputation as a moderate. He cut short his American sojourn, returned to Burundi, and announced that he had relieved Ntibantunganya of his duties and was taking power.