Brunei is the third-largest oil producer in Southeast Asia after Indonesia and Malaysia, and the sultan's government has been heavily involved in developing its rich natural gas and petroleum resources. Enormous wealth has been generated from royalties on both oil and liquefied natural gas. Oil is produced by Brunei Shell Petroleum and Brunei Shell Marketing, in both of which the government now holds a 50% interest; gas is produced by Brunei LNG, in which the government, Shell, and Mitsubishi of Japan hold equal shares. Brunei's per capita income is one of the highest in the world, and the citizens of Brunei receive free health care and generous state pensions. There is no income tax, and government loans are freely available at an annual interest rate of 1%. Brunei's balance of trade is consistently favorable, and government revenues consistently exceed expenditures.

However, the petroleum sector was adversely affected by depressed prices on the world oil market in the 1980s. Also, in 1987, the country's reserves of petroleum were estimated to be sufficient for production at current levels for only 27 more years. Thus, Brunei faces the problem of how to diversify its economy and move away from total dependence on a dwindling resource. In 1985, the sultan's government proposed a 20-year master plan to broaden the economy, suggesting development of a microchip and optics industry. In 1986 the government introduced a fifth National Development Plan, which was designed to reduce reliance on petroleum and natural gas income and to achieve self-sufficiency in food production. The government provides 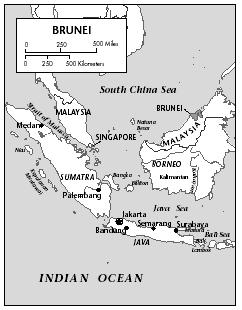 technical training in order to generate more attractive jobs. The sultan's long-term objective is to turn Brunei into a center for banking, trade, and financial services. As of 2003, the government still faced great challenges in its effort to promote the development of technological industries.

One of the sultan's major achievements was the establishment of the Sultan Haji Hassanal Bolkiah Foundation in 1992. The foundation is a gift from the sultan to his people and focuses on, among other things, financing researchrelated works.