Lula's first experience with running for office came during his years as a labor union leader. He was influenced to run for a low-level post in his steel factory union in 1969 by his brother, a seasoned union leader. Lula's charisma, leadership skills, and effectiveness in bargaining with the factory management helped him gain the respect and confidence of his fellow workers. By 1975, he was the president of a union that represented more than 100,000 factory workers. It was that position that first drove him to try to influence government policy. Lula combined his concern for the living conditions of his union members with a growing concern over the decisions made by the central government. Although Brazil was under military rule, Lula actively sought to influence the government's labor policies through peaceful means.

Although he was not a member of any political party, his sympathies were with the left. Thus, Lula did not rely on political connections to negotiate on behalf of his union and to bring about reforms that would benefit all Brazilian workers. When the military government moved towards greater liberties and a transition to democracy emerged as a possibility, Lula formed a coalition of labor leaders, intellectuals, rural and religious leaders, and left-wing politicians to form the Brazilian Workers' Party (PT) in 1980. In 1982, the PT participated in legislative and state elections. Lula was unsuccessful in his campaign to become governor of the state 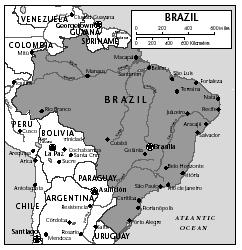 of São Paulo, but eight PT militants were elected into Brazil's Chamber of Deputies. In 1986, Lula headed his party's list for the legislative election and was elected to the Chamber of Deputies with more votes than any other candidate in the country.

In 1989, when Brazil held presidential elections for the first time since 1960, Lula ran as the PT candidate, losing by a narrow margin in the runoff election. He tried again in the elections of 1994 and 1998, but was easily defeated by Fernando Henrique Cardoso. Yet, Lula continued to focus his efforts on building his party, supporting PT candidates running for other offices, including Senate, Chamber of Deputies, state governorships, and mayoralties. His efforts paid off, as he was widely considered a reliable and trustworthy candidate in the 2002 presidential election. In the first round of voting, Lula obtained 46.4% of the vote, short of an absolute majority. A mandatory runoff was held on 6 October 2002; Lula garnered 61.3%, easily defeating Social Democratic Party candidate José Serra (38.7%). More PT candidates won seats in the Chamber of Deputies (91 out of 513) than any other party.