In 1908, the Austro-Hungarian empire formally annexed Bosnia. The move provoked neighboring Serbia, which coveted Bosnia because of its large Serbian population. When a young Bosnian Serb assassinated Austrian Crown Prince Ferdinand in Sarajevo in the name of Serbian national unity, World War I began. In 1918, Bosnia was incorporated into the newly formed Kingdom of Serbs, Croats, and Slovenes (later renamed Yugoslavia). During World War II, the Nazi puppet state in Croatia annexed all of Bosnia. This period saw mass murder of Serbs by the ruling Croatian fascists, as well as massacres of Muslims and Croats by Serb nationalists. The communist Partisans, led by Josip Broz, popularly known as "Tito," led the resistance. After the war, Bosnia-Herzegovina became one of six republics in the reconstituted Yugoslavia. Tito ruled from 1945 until his death in 1980.

In the 1980s, Bosnia, like the other republics, experienced rising anticommunist and nationalist sentiment. In 1990, a number of independent political parties were formed, including nationalist Muslim, Serb, and Croat parties. Multiparty elections were held in November 1990, based on a system of proportional representation by nationality. The nationalist parties ran on a platform of defense of their cultures, but none of them called for dismembering Bosnia. The election resulted in a Parliament divided along ethnic lines. The presidency of the republic included two members from each of the three ethnic groups, plus one ethnically mixed member. Alija Izetbegovic, head of the Democratic Action Party (SDA), was chosen to lead the presidency.

The three nationalist parties formed a coalition government. The Bosnian government at first did not seek independence but rather promoted remaining in a new Yugoslav federation. In March 1991, however, the presidents of Serbia and Croatia secretly agreed to partition Bosnia between them. By fall 1991, working closely with Belgrade, the Bosnian Serb Democratic Party (SDS) had established numerous "Serbian autonomous regions" throughout Bosnia and began forming its own militias. The SDS declared a "Serbian Republic of Bosnia and Herzegovina," uniting these regions. In January 1992, an independent Serb republic in Bosnia was created, claiming over 60% of the Republic's territory. Meanwhile, the European Union (EU) backed the idea of holding a referendum on independence as a preliminary move to international recognition. The Bosnian Muslim and Croat communities voted overwhelmingly in favor of independence, but the Bosnian Serb leadership called for a boycott of the vote.

In April 1992, Bosnia-Herzegovina gained recognition from the EU and the United States as an independent state. About the same time, Serbian irregular forces, backed by the Yugoslav Army, launched attacks throughout the republic. They quickly seized more than two-thirds of the Bosnian territory, carrying out policies of "ethnic cleansing" to drive non-Serb populations out of their territory. More than two million people were driven from their homes, creating the greatest flow of refugees in Europe since World War II (1939–45). An estimated 200,000 persons were killed. Fighting between ethnic Croats and Muslims in 1993–94 also resulted in "ethnic cleansing" by both sides. In response to U.S. and European pressure, Bosnian Croat and Muslim leaders agreed to a ceasefire between their communities and to the formation of a Muslim-Croat federation in Bosnia-Herzegovina. In this way, the Croat and Muslim communities were officially allied against their common Serb enemy.

Numerous international attempts to negotiate a peace settlement failed. United Nations (UN) peacekeepers on the ground, with a mandate to provide humanitarian aid to the victims of the war, were unable to keep the peace. In August 1995, a North Atlantic Treaty Organization (NATO) 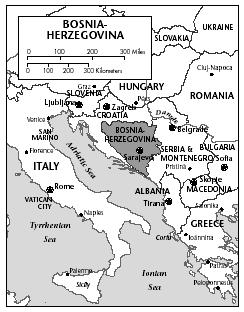 bombing campaign, coupled with a series of successful Muslim-Croat counteroffensives against the Bosnian Serb forces, brought the parties to the negotiating table. Serbian president Slobodan Milosevic accepted responsibility for the Bosnian Serb leadership. After three weeks of negotiations at Wright-Patterson Air Force Base in Dayton, Ohio, the presidents of Bosnia, Croatia, and Serbia agreed to a widereaching peace accord (known as the "Dayton Accords") in November 1995.

Under the terms of the Dayton peace agreement, Bosnia-Herzegovina maintains its current external borders. Internally, it comprises two equal entities, the Muslim-Croat Federation and the Republika Srpska. Each entity has its own Parliament and government with wide-ranging powers, as well as its own armed forces. Each entity may establish "special parallel relationships with neighboring states," meaning Croatia and Serbia. At the all-republic level, there is a joint presidency, council of ministers, and a bicameral legislature.

Under the accords, the Muslim-Croat Federation received roughly 51% of the territory of Bosnia-Herzegovina while the Republika Srpska received 49%. The parties to the accords could not agree on who would control the Brcko region, a strategic northeastern corridor between the Serb-held regions. The status of Brcko was submitted to binding arbitration. In March 1999, a tribunal determined that Brcko would have its own multiethnic autonomous government. The military part of the Dayton accords committed the two sides to maintain the ceasefire and separate their forces. A NATO-led force was deployed to ensure implementation of the military section of the agreement. The accords required the parties to cooperate fully with the international war crimes tribunal for the former Yugoslavia. In 2001 and 2002, the tribunal began issuing indictments and arresting those charges with war crimes, including Slobodan Milosevic, Radovan Karadzic, and Ratko Mladic. The agreement included guarantees on the right of refugees to return to their homes and on the protection of human rights.

Implementation of the military aspects of the agreement proceeded smoothly, although NATO had to extend its initial one-year deployment numerous times. In June 1998, NATO pledged to keep its peacekeeping force in Bosnia until a self-sustaining peace is achieved. General elections were held in September 1996, September 1998, and October 2002. The three nationalist parties continue to dominate the political scene despite some inroads made by moderates in the 1998 elections. In the 2002 poll, just a little over 50% of the populations of the entities turned out to vote. Among younger citizens, participation in the polling was dramatically lower. Election monitors reported that 75% of voters were over 40 years old and fewer than 10% of young people who had become eligible to vote since the last elections had even registered to vote.

There were three winners in the presidential vote of 2002. Sulejman Tihic of the nationalist Party of Democratic Action (SDA) represented the Bosniak Muslim faction. Dragan Covic of the Croatian Democratic Union of BiH (HDZ-BiH) won the Croatian post. Mirko Sarovic was elected from the Serbian constituency. Sarovic was the first to serve, but early on in his presidency he was engulfed in a political scandal when a United States intelligence agency operating in the area revealed that a military factory in the Republika Srpska had sold arms to Iraq in violation of an international arms embargo imposed by the United Nations. No link was ever established directly implicating Sarovic in this scandal, but the United States put great pressure on the UN High Representative to take action. When it became apparent that he would be removed from office, Sarovic resigned his post in April 2003 and was replaced by his Serbian colleague Barislov Paravac.

Central Bosnian government institutions have remained largely deadlocked by interethnic disputes. In December 1997, the UN High Representative acquired greater powers to impose decisions and has since imposed numerous measures and forced the dismissal of obstructionist officials. Many indicted war criminals, mainly Bosnian Serbs, remain at large. In April 2002 several were negotiating their surrender to the UN war crimes tribunal based in The Hague, Netherlands, and in early 2003, former president of the Republika Srpska Biljana Plavsic surrendered to the tribunal and pleaded guilty to one count of crimes against humanity. She was sentenced to 11 years in prison. Aid from international donors has facilitated the reconstruction effort in Bosnia and spurred economic growth. The effort has not, however, led to a self-sustaining recovery. A key shortfall in peace implementation has been the inability of the vast majority of refugees to return to their former homes, especially in areas controlled by a different ethnic group.

Since October 2002 the presidency has been comprised of Bosniak Sulejman Tihic, Serb Mirko Sarovic (replaced by Borislav Paravac in April 2003), and Croat Dragan Covic.