Bolivia gained its independence from Spain in 1825. Domestic instability and conflicts with neighboring states have marred its history since that date. In regional conflicts, Bolivia has lost territory to Brazil, Chile, Paraguay, and Peru. No country in Latin America has experienced as many military coups—on average about one every other year since independence. A 1971 coup overthrew the government of General Juan Torres and brought Colonel Hugo Banzer Suárez to power. Banzer ruled from 1971–78, and then stood for election over the next three years, although the election results were either annulled (1978) or failed to produce a winner (1979 and 1980). In 1980 Banzer founded the National Democratic Alliance (Alianza Democrática Nacionalista—ADN) party, one of the largest opposition groups.

A July 1980 coup brought General Luis García Meza to power. He suspended Congress, but he was toppled in the country's 190th coup in August 1981. The country was under control of the military, and the Congress was reinstated. From 1982–85, the presidency of Hernán Siles Zuazo was characterized by social tension and unrest. Siles called for elections a year early (1985), and Banzer obtained the first plurality of votes, but Congress chose Víctor Paz Estenssoro. In 1989, after placing a close third, Banzer's party threw its support behind Jaime Paz Zamora, the leftist candidate. Paz Zamora's Nationalist Revolutionary Movement (Movimiento de la Izquierda Revolucionaria—MIR) party members had been persecuted during the Banzer dictatorship of the 1970s. The surprising alliance between the MIR and the ADN prevented Sanchez de Lozada, the front runner, from being elected in 1989. It all but guaranteed that Banzer would have MIR support in future elections. An era of peaceful transition in the presidency was begun. In 1993, Sánchez de Losada became president when ratified by Congress. When he finished his term in 1997, it was the longest period of democratic life in that country's history. During his term, indigenous people of Bolivia made significant strides due to the leadership of Sánchez de Losada.

The 1997 elections once again failed to produce a clear winner, and negotiations between the five largest parties were needed to select the next president. Banzer secured support from the MIR and populist Citizen's Solidarity Union (Unión Cívica Solidaridad—UCS). After having tried five times, he finally succeeded in becoming the democratically elected president of Bolivia at the age of 71, only to resign before serving his full term due to health problems. Jorge Quiroga Ramírez, Banzer's vice president, stepped in to serve the remaining months of Banzer's term. Although many believed that Sánchez de Lozada had retired from politics in 1997, he returned to run for president in the 30 June 2002 election. 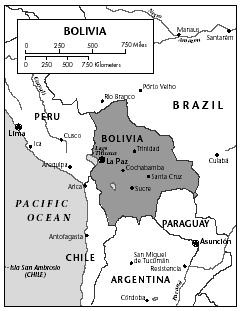 According to the 1967 Constitution (amended in 1994), Bolivia is a representative democracy. A bicameral Congress composed of a 27-member Senate and a 130-member Chamber of Deputies holds legislative power. Coups and periods of political unrest occur frequently; the Congress has been dissolved by the military twice—1969–79 and 1980–82. The 1994 amendments provided recognition for Bolivia's indigenous people and increased the presidential powers.

Voters elect members of both houses for four-year terms. Executive power is vested in the president who appoints the ministers of state. The president is elected directly for a four-year term; if no candidate wins a majority of votes, the Congress chooses the president. Although voting is mandatory for all adults 21 years or older (18 or older if they are married), compliance is low—particularly in rural areas.

Bolivia has an electoral system based on proportional representation that fosters the existence of several mid-size political parties. The four largest parties are the center-left National Revolutionary Movement (Movimiento Nacionalista Revolucionario—MNR); the leftist MIR, the center-right ADN, and the UCS.