Immediately upon taking the throne, the new king announced that he was determined to follow in his father's footsteps. He indicated that he planned to slowly and gradually develop the country into a constitutional monarchy. And he made it clear that there was a division of power between the head of the monastery and the king. In all religious matters, he contended, the je khempo is the deciding authority; for the state administration, the king will have the final say.

However, the powerful Buddhist clergy retains great influence. The New York Times in 1988 reported that the clergy was able to prevent large-scale tourism because it feared that outside influences would hurt national character and the morality of the young. The word "revered" has often been used to describe the people's attitude toward the king. But Wangchuk still retains a lingering mistrust in delegating authority. The legislature does little more than rubber stamp bills initiated by the monarch. However, it has also been suggested that there has not been much demand for greater political participation by the populace. In 2002, a 39-member committee drafted a constitution for the king's review. Newspapers in Bhutan reported that political parties would be legalized and the legislature would have more authority if a new constitution were adopted.

Bhutanese society has had a reputation for nonviolence and tolerance. In 1988, Wangchuk turned his attention to 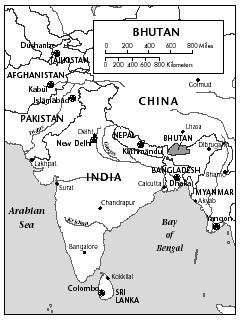 reforming the country's civil service. He reduced the number of bureaucrats, which also weakened somewhat the influence of the religious sects that had played a substantial role in government, and rationalized the salary system. In 1998, he introduced a law that would require the king to abdicate if the Assembly supported a vote of no-confidence by a twothirds majority, but there appeared to be little threat of such a vote, since there was virtually no organized opposition to the king or his policies.