Arthur's entry into the political arena was in many ways difficult. He faced two by-elections in the same year. In 1984, Arthur's party, the BLP, went to court to contest the outcome of a House of Assembly by-election that was officially won by his opponent in the DLP, Sybil Leacock. The High Court later ruled that there should be a new poll, which was subsequently won by Arthur. Since then, he has never lost an election in his constituency.

Prior to 1983, Arthur was the consummate technocrat who worked as an economist under Prime Minister Michael Manley's democratic socialist government in Jamaica. When Arthur became a member of the BLP, Tom Adams, leader of the BLP and prime minister of Barbados, projected him as a bright young economist with future leadership potential. In 1983, Arthur was appointed to the Barbados Senate and 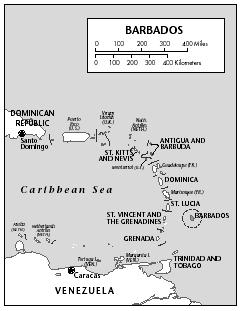 became chairman of his party. Following his 1984 victory at the polls, Arthur became a member of Parliament. In 1985 and 1986 he served as parliamentary secretary in the Ministry of Finance. After his party's defeat in two successive elections between 1986 and 1994 by the DLP, Arthur was made opposition leader and leader of the BLP.

Arthur became the fifth prime minister of Barbados on 7 September 1994, when he successfully led the BLP to an electoral victory, capturing 19 of the 28 seats in the House of Assembly. In the election of January 1999, Arthur was again successful. This time his party won by an even greater margin. The BLP took 26 seats while the opposition Democratic Labour Party won only two seats in the House of Assembly. The next election was scheduled for January 2004.