When British rule in India ended in August 1947, the country was partitioned to create a new independent nation, Pakistan. Comprised of the Muslim-majority areas in the northwest and northeast of British India, Pakistan came into existence as a country divided in two parts, West and East Pakistan, whose people, the majority of whom share a common religion, were separated by nearly 1,600 km (1,000 mi) of Indian territory and differences in language, culture, and traditions. Over the years, West Pakistan's economic and political domination of the more populous East Pakistan sharpened awareness of these differences among many East Pakistanis, fueling Bengali nationalism and demands for greater autonomy. Spearheading this call was the Awami League, a leading political party in East Pakistan. In late 1971, India and Pakistan fought a war that ended with the surrender of Pakistani troops in East Pakistan and the independence of Bangladesh on 16 December 1971.

Attempts to establish a parliamentary system failed when the government proved unable to cope with the challenge of reconstructing and rebuilding an economy and civil society devastated by war. Amidst growing political and economic anarchy, a state of emergency was declared and most constitutional rights were suspended. Opposition parties were suppressed and Bangladesh became a one-party state, plagued by coups and counter-coups. A popular uprising on 6 December 1990 paved the way for parliamentary elections and ended 16 years of political instability.

Under the present system, Bangladesh has a unicameral legislature, the Jatiya Sangsad, comprised of 300 members. Members are directly elected from single-member constituencies for five-year terms on the basis of universal adult franchise. The constitutional amendment reserving 30 additional seats for indirect election of women members expired in May 2001. The leader of the party with a majority in the National Assembly serves as prime minister and is vested with full executive powers as head of government. The prime minister appoints a Council of Ministers, or Cabinet, whose members administer the departments that carry out the government's functions. The president plays a largely ceremonial role as head of state and is indirectly elected by the National Assembly to serve a five-year term.

The country's main political organizations are the Awami League (AL, People's League), the Bangladesh Nationalist Party (BNP or Bangladesh Jatiyatabadi Dal), the Jatiya Party (JP), and the Islam Conference Bangladesh (JI or Jamaat-e-Islami Party, Islamist). Parliamentary elections held in June 1996 brought the Awami League to power after a hiatus of more than 20 years. The AL won 178 of the 300 directly elected seats in the National Assembly and formed a government with the parliamentary support of the Jatiya Party's 33 members. As of February 2000, the AL had an absolute majority with 177 seats in the 330-member People's Assembly. But in elections held in October 2001, the BNP and 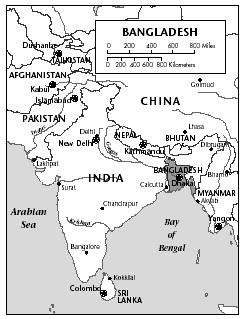 its coalition partners controlled 215 seats (of 300) to the AL's 62 and Begum Khaleda Zia was named prime minister of the coalition government.