Kocharyan's presidential campaign stressed national traditions and values. In his inaugural speech, Kocharyan pledged that his administration "will act as a partner and advisor to its citizens." He promised that his government would guarantee freedom of speech and religion, allow the "unhampered functioning" of political parties, and ensure minority ethnic rights.

Kocharyan's campaign platform and inaugural address stressed the need for government intervention to rehabilitate industrial production and to create jobs. He called for government investments in Armenian industry, small and medium-sized businesses, and the creation of jobs. Kocharyan pledged to make the tax system fairer and clearer and to fight against illegal business activity, while simultaneously offering protection to legal businesses. He favored low-interest loans for small businesses and the elimination of government impediments to the creation of new businesses. Kocharyan also pledged to carry out social programs. His platform called 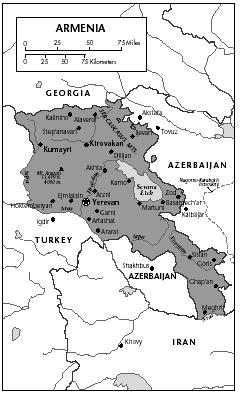 for increased wages and pensions, free medical care for the indigent, and improved integration of refugees into Armenian society by clarifying their status and providing housing.

Kocharyan urged greater ties with the Armenian diaspora, including a possible constitutional change to allow dual citizenship. He intended to continue the policy he followed as president of NK—to promote the integration of the economies, financial and educational systems, and the culture of NK and Armenia. Kocharyan observed that NK and Armenia each had legislatures and presidents, but this constituted "one body and two heads....No force will dare or evenstand a chance to divide that body." At the same time, Kocharyan stressed that NK's ultimate status depended on the wishes of its people.