Andorra has been considered a state since the 13th century, but only recently has its population attained a large measure of control over the country's affairs. Archaeological evidence indicates that Andorra's mountain valleys were inhabited as early as 4000 BC . During the early Christian era, the Romans encouraged resident tribes to surrender their nomadic life and form settlements there.

In 1278, the French count of Foix and the Spanish bishop of Urgel became the "co-princes" of the country, granting Andorra nominal independence but retaining authority over its foreign contacts and trade. For centuries, Andorra was an anomaly among states. Councils of Andorrans exercised an element of self-expression; at the same time, ultimate authority rested in the hands of the co-princes. The state was therefore neither a principality nor a republic.

France and Spain ultimately spurred the Andorrans to assume greater responsibility over their own affairs and to move towards more democratic practices. For most of Andorra's history, there was no functioning executive office within the government. Local councils and a national legislative body provided day-to-day governing authority. Until 1970, the vote was given only to males who were from families that had lived in Andorra for at least three generations. In that year, women obtained the vote. Few foreigners were allowed to gain citizenship. The Andorrans permitted no political parties and no labor unions. In 1975, the Spanish dictator Francisco Franco died and Spain embraced democracy. From that moment, Spain, together with France, encouraged reform in Andorra. In 1981, an institution with vague executive powers was created, but efforts to codify a coherent body of law and a constitution failed. In 1993, Andorrans declared their independence. A Constitution gave Andorra sovereignty over most of its domestic affairs, trade, and general foreign policy.

France and Spain, however, continue to guide important aspects of life in Andorra. French and Spanish officials oversee Andorra's judicial system. Appeals to an ultimate court of jurisdiction are heard in courts in either France or Spain. Andorra has a small army comprised of males who own firearms. They have not been engaged in a conflict for over 700 years and today their duties are largely ceremonial. France and Spain maintain responsibility for Andorran defense policy.

The growing foreign population has provided much of the capital for Andorra's economy. By the 1970s, foreign nationals began to seek a greater definition of their rights, including eligibility for citizenship and the right to organize. Andorrans, a minority in their own country, had traditionally sought to limit foreigners' rights. The Constitution is a compromise in that it recognizes foreigners' aspirations by opening the door to citizenship but preserves political power in the hands of the indigenous population. Political parties and unions are now legal. Andorran families of long standing dominate political life. Foreigners may gain citizenship after 30 years of residency or if they have lived in the country since before 1975. Conservative Roman Catholic traditions are strong in Andorra. Although women may vote, few have succeeded in politics or business. 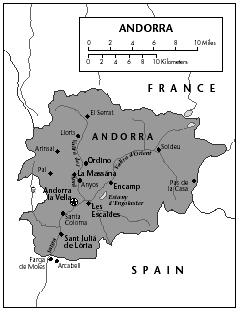 majority vote. These practices resemble a parliamentary system, with the Executive Council president and the cabinet functioning as the executive branch and the General Council as the legislature. The most important cabinet offices are foreign affairs, finance, the economy, and justice.