Albania experienced a brief period of independence in the fifteenth century but was otherwise subjected to foreign rule. Independence was finally gained in 1912 after four and one-half centuries of Turkish Ottoman rule, and its national boundaries were set for the first time in 1913. After World War I, following a period of occupation by Italy, France, and Yugoslavia, the national independent state of Albania was reestablished. Italy occupied the country in 1939, forcing Ahmet Zogu (who called himself King Zog I) into exile. The Communist-led National Liberation Front (NLF) resistance movement, assisted by Yugoslav partisans, took power in November 1944. NLF leader, Enver Hoxha (1908–85), headed both the Albanian Communist Party and the country for four decades, until his death in 1985.

The Hoxha era was known for its extreme internal repression and isolationist tendencies. Albanian industries and agriculture were collectivized. The population was rigidly controlled by the ruling Albanian Workers Party (the Communist Party, known in 2003 as the Albanian Socialist Party—PS) and its secret police apparatus. In foreign policy, Hoxha's regime pursued increasingly isolationist tendencies. Albania broke away from Yugoslav tutelage after the 1948 split between Yugoslav leader Tito and Soviet leader Joseph Stalin. Ties with the former Union of Soviet Socialist Republics (USSR) were broken in 1961, and Albania withdrew from the Warsaw Pact in 1968. China became its main ally in the 1960s, but that relationship cooled in the 1970s, leaving Albania almost completely isolated.

Albania was the last Eastern European country to embark on democratization and market economic reforms in the 1980s. Hoxha's successor, Ramiz Alia, was considered somewhat less repressive and began to increase Albania's exposure to the outside world while maintaining the Communist Party's exclusive hold on power. Large demonstrations in December 1990, triggered by widespread internal unrest, pushed the Alia government to accept multiparty elections. Albania held its first free elections in 45 years in March 1991, with candidates from both the newly formed Democratic Party (PD) and the Albanian Workers Party. Although its fairness was questioned by outside observers, the Albanian Workers Party (later renamed the Albanian Socialist Party—PS) won two-thirds of the vote and formed a government under Albanian Workers Party leader Fatos Nano, who formed a government made up entirely of Workers Party members. Following large-scale strikes and demonstrations, the Nano government ceded power in June 1991 to a coalition government including the renamed Socialist Party (PS) and the opposition Democratic Party. Members of the PD were given most of the key economic positions and were primarily responsible for initiating new economic policies. However, in December 1991, frustrated by their inability to pass any reforms, the PD withdrew from the government, forcing new elections.

General elections held in March 1992 resulted in a resounding victory for the PD, which gained 62% of the vote. The PS won only 25% of the vote (down from more than 67% the previous year). In April 1992, Alia resigned as the last Communist leader in Albania, and the new People's Assembly (Parliament) convened, electing PD chairman Sali Berisha to the presidency. Berisha named Aleksander Meksi prime minister, and members of the PD dominated his cabinet. In the following years, the PD undertook measures to 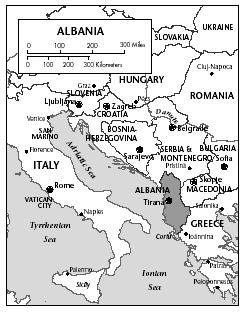 Albania's next parliamentary elections were held on 26 May and 2 June 1996. Amidst charges of voting fraud, virtually all opposition parties pulled out before polling ended and boycotted the second round. The Organization for Security and Cooperation in Europe (OSCE), as well as other international observers, noted serious irregularities during the vote, including fraud, ballot stuffing, intimidation, and coercion tactics. The PD won almost all of the parliamentary seats. The new Parliament was inaugurated on 1 July, but the PS boycotted the session. Berisha nominated a new government under Prime Minister Meksi on 11 July 1996.

Beginning in late 1996, numerous popular yet high-risk investment schemes collapsed, prompting violent riots in many Albanian cities. Over the previous two years, the socalled "pyramid schemes" promised exorbitant returns on investment, attracting over US $1 billion from Albanian citizens. The collapse of these schemes led to widespread demonstrations, as many Albanians blamed the government for corruption and mismanagement in regulating the investment enterprises. In early March 1997, the demonstrations turned into armed rebellion in numerous cities in the south as anti-Berisha rebels stormed arms depots. Estimates of the number of Albanians killed in the ensuing conflict ranged from several hundred to 2,000. Thousands more fled to Italy and other countries. After international mediation and the installation of an international peacekeeping force, Berisha dismissed the Meksi government, released Fatos Nano from prison, pardoned him, and appointed him prime minister. Berisha and Nano agreed to hold parliamentary elections by June 1997.

New elections were held under close international scrutiny on 29 June and 6 July 1997. The opposition PS won a landslide victory at the expense of Berisha's PD. In Parliament, the PS won an absolute majority of 101 out of 155 seats. Berisha resigned on 23 July 1997. The Parliament elected PS leader Rexhep Mejdani to the presidency. Mejdani named Fatos Nano to be prime minister (for the second time) of the PS-led government, which was sworn in on 25 July 1997.

Relations between the ruling PS and Berisha's PD remained extremely contentious after the 1997 vote. The PD called for a boycott of some sessions of Parliament and favored early elections. Albania appeared on the verge of chaos again in mid-September 1998 when the murder of a prominent PD member led to violent demonstrations. Government authorities quickly regained control of sites that had been stormed by PD supporters. Nano accused Berisha of attempting to stage a coup. The United States, the European Union (EU), and major international organizations condemned the violence and appealed to all parties to work toward a peaceful solution. Nano resigned at the end of September, and the PS nominated Pandeli Majko to succeed him. Majko was sworn in on 2 October 1998.

In spring 1999, in the wake of bloody conflict between ethnic Albanians living in neighboring Kosovo and Serb forces who wanted to reclaim the land there, thousands of ethnic Albanians poured into the country, straining an already weak economy. President Mejdani, hoping that change might foster stability, appointed Ilir Meta to replace Majko in the post of prime minister. On 27 October 1999, Meta took over the post, but he was unable to bring an end to the conflict among factions in the Albanian government. In late January 2002, Meta resigned suddenly over unresolved conflicts with PS leader Fatos Nano. President Mejdani replaced Meta with his predecessor, Pandeli Majko, as prime minister. Majko, like Meta, could not bring the factions into alignment; he resigned in July 2002, to be replaced by Fatos Nano.