The former Union of Soviet Socialist Republics (USSR) occupied Afghanistan from 1979 until early 1989. By late 1987, the United Nations High Commissioner for Refugees (UNHCR) estimated that one million Afghans had died in the fighting between Soviet troops and the mujahidin resistance forces (supported by arms from the United States and Islamic nations such as Pakistan). The Soviets withdrew in 1989, partly because of instability in their own government. (The USSR broke apart into independent states in 1991.) Afghanistan experienced internal chaos and President Muhammad Najibullah struggled to maintain control of the country as pressure from the mujahidin and outside forces increased. The country floundered, with rival factions battling for control of the government. In 1992, the mujahidin gained control of Kabul and Najibullah's government fell.

An interim government was established by a coalition of Islamic groups known as the Seven Party Alliance (SPA). Rival groups continued to clash violently and UN attempts to broker peace among the groups were unsuccessful. Burhanuddin Rabbani became president of the Interim Government in 1992, but maintaining control of the various factions in the country proved nearly impossible. Alliances continually shifted after President Rabbani took office; he was scheduled to leave office in December 1994 but refused on the grounds that political authority would disintegrate totally.

One of the major forces vying for power was the Uzbek militia of General Abdul Rashid Dostum, whose break with Najibullah in early 1992 helped overthrow the communist regime. In January 1994, Dostum led an unsuccessful rebellion against Rabbani. Another faction was the Iran-backed Hizb-e-Wahdat (Unity Party, an alliance of eight Shia Muslim groups). In early June 1992 Hizb-e-Wahdat had agreed to join the mujahidin regime but broke with Rabbani in January 1994.

In 1994, a new group known as the Taliban (Students of Religion, or Seekers) formed and began rallying to control the country. Consisting of Islamic clerics and students from seminaries that sprung up in Pakistan among the communities of Afghan refugees, the Taliban movement came into being after the war against the Soviets and Najibullah. The Taliban seized control of the southeastern city of Kandahar in November 1994 and continued to gather strength.

In February 1995, the Taliban gained control of areas on the outskirts of Kabul and demanded that Rabbani surrender. When Rabbani refused, and the Taliban rejected UN efforts to include it in a peaceful transition, an 18-month stalemate around Kabul ensued. In its drive to Kabul, the Taliban amassed about 25,000 troops, a few hundred tanks, and ten 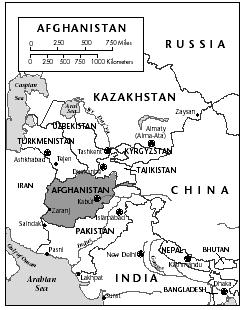 combat aircraft. In September 1996, Taliban victories east of Kabul led to the destruction of the Rabbani government's defenses, and the government withdrew to the valley north of Kabul. With the Taliban capture of Kabul, the Northern Alliance formed, made up of differing factions that had one thing in common: their passionate interest in ousting the Taliban. Northern Alliance forces continued to fight for control of the north.

In spring 2000, the Taliban, claiming a series of defections from the Rabbani Northern Alliance camp, began preparations for a renewed offensive to gain the remaining part of Afghanistan not under their control. The Taliban government was led by mujahidin fighter-turned-religious-scholar, Muhammad Omar. He is thought to have been born in Kandahar in 1962. Described as a determined man, Omar had served as deputy chief commander in the Harakat-i-Inqilab-i Islamic party of Mohammad Nabi Mohammadi during the Soviet occupation of Afghanistan in the 1980s. Virtually unknown until the Taliban's capture of Kandahar, Omar remained a mysterious figure with reportedly strong ties to Osama bin Laden and other Islamist radicals. Under Omar's Taliban government, the Afghan people were subjected to harsh imposition of Islamic law. Women were forbidden from working outside the home (except health workers), girls' schools were closed, and a strict Islamic dress code was imposed. The Taliban lost international support as it imposed harsh punishments on those who violated Islamic law. The UN and other international aid organizations (including UNHCR, UNICEF, Save the Children, and Oxfam) cut back or ceased operations in protest; many staff members were female and unable to adhere to the strict regulations. Taliban control did restore peace by suppressing and disarming members of rival militias. The roads were reopened, leading to a greater availability of food in areas under Taliban control.

When terrorists attacked the World Trade Center in New York and The Pentagon in Washington, D.C., on 11 September 2001, international attention focused on Afghanistan. Most experts implicated Osama bin Laden and his close associate, Taliban leader Mullah Muhammad Omar, in the attacks. The U.S. government, with support of its allies, undertook a month of massive air attacks until the Taliban was driven out of power in October 2001 and an interim government was installed in December 2001. Hamid Karzai was named chairman of the interim government.

In the weeks and months following the fall of the Taliban, life in Afghanistan was fraught with danger. U.S.-led military operations were ongoing. International peacekeepers, aid workers, and Afghans became victims of grenade attacks, fire fights, and bombings, making the security situation precarious. Thus, the task of reconstruction and providing aid to Afghanistan has proven difficult. In January 2002, donor countries pledged US $4.5 billion for the reconstruction effort. However, less than half of the amount earmarked for 2002 was ever actually delivered.

In June 2002, a loya jirga (council of elders) was convened to choose a government to lead the country for 18 months to two years until elections are held. Karzai was elected transitional head of state, garnering 1,295 of a possible 1,575 votes. On 19 and 22 June Karzai introduced a 28-member cabinet representative of many different ethnic and political backgrounds. He named three vice presidents—Mohammed Qasim Fahim, Karim Khalili, and Haji Abdul Qadir. Vice President Qadir was assassinated on 6 July 2002. Karzai himself narrowly escaped assassination on 5 September 2002, as a gunman dressed in an Afghan military uniform shot at him and Kandahar's governor Gul Agha Sherzai as they were getting into their car. On 22 November 2002, a plot to assassinate Karzai or his defense minister, Mohammed Fahim, was thwarted.