By and large, the regular budget has never created major disputes among the member states, and most governments have usually paid their dues relatively punctually. However, beginning in 1963, the USSR refused as a matter of principle to contribute to certain items in the regular budget, such as the UN Commission for the Unification and Rehabilitation of Korea until its dissolution by a consensus vote of the 1973 Assembly, or to those parts of the regular budget devoted to the redemption of UN bonds (a method of raising funds for certain UN peacekeeping operations). France has taken a similar stand in connection with the redemption of the bonds. In addition, a number of countries have refused to contribute to the special accounts for peacekeeping operations. It was chiefly these controversial expenditures which precipitated the UN's financial emergency in the mid-1960s.

In July 1962, the International Court of Justice, at the request of the General Assembly, issued an advisory opinion in which it declared that the expenses of the first UN Emergency Force in the Middle East and the UN Force in the Congo constituted expenses of the organization within the meaning of Article 17, paragraph 2, of the Charter and should thus be borne by member states as apportioned by the General Assembly. The Assembly accepted the court's opinion in December 1962, but debate over peacekeeping operations and the financial difficulties continued. A number of other factors, moreover, contributed to the precariousness of the financial position of the organization, notably the lateness of many member states in paying their assessed contributions, the currency fluctuations of the 1970s (marked by two devaluations of the US dollar, on which the UN budget is based), and inflation.

A Group of High-Level Intergovernmental Experts to Review the Efficiency of the Administrative and Financial Functioning of the UN, appointed by the General Assembly in 1985, submitted to the General Assembly in the following year its recommendations for enhancing the efficiency and reducing the expenditures of the organization. Implementation of the group's recommendations was the condition which a number of states, including the US, placed on further payment of their assessments.

Among the solutions proposed in 1985 were an increase in the Working Capital Fund to US$ 200 million, the issue of certificates of indebtedness in the amount of the arrears—in effect, borrowing from member states—and borrowing on the open market.

In 1992, Secretary-General Boutros Boutros-Ghali requested that the Ford Foundation assemble an independent advisory group to recommend ways to create a secure, long-term financial base for the organization. The group, co-chaired by Shijuro Ogata, former Deputy Governer of the Japan Development Bank, and Paul Volcker, former Board of Governors' Chairman of the United States Federal Reserve Bank, issued its report in February 1993. Entitled "Financing an Effective United Nations," it suggested the following measures:

Also in 1993, the Joint Inspection Unit (JIU) of the Secretariat issued a report declaring: "The old financial malaise is emerging with renewed evidence. What was a chronic illness is becoming a critical one." Among JIU proposals:

The fundamental requirement for the essential financial stability of the UN, however, remained the full and timely payment by all member states of their assessments, in accordance with Article 17, paragraph 2, of the Charter, which states that: "The expenses of the Organization shall be borne by the Members as apportioned by the General Assembly."

In 1994, the UN General Assembly created the Office of Internal Oversight Service (OIOS) as a department within the Secretariat to independently monitor reports of waste, fraud, and mismanagement within the UN. OIOS focuses on high-risk activities, such as peace-keeping operations, humanitarian activities, and procurement while simultaneously providing oversight to all activities of the UN. OIOS provides oversight through internal auditing, management consulting, investigations, monitoring, inspection, and evaluation.

In 1996, efforts at managerial reform targeted five areas of management: cost structure, human resources, information, tech nology, and work programs. This approach has required reductions and redeployment of staff. Between 1984–95 and 1996–97, the UN eliminated 2,046 positions, and about 1,000 of the budgeted posts that exist now are kept vacant. Travel was reduced by 26% in 1996, and printing costs were reduced by 27% in early 1996, as more than 270,000 UN documents have become available electronically.

On 23 March 2000, Under-Secretary-General for Management Joseph E. Connor told the General Assembly's Fifth Committee (Administrative and Budgetary) that in 1999 the United Nations "took a step back from the financial brink." While regular budget and tribunals assessments were as expected, there was an increase in peacekeeping assessments in 1999, he added. Even with that increase, the obligatory cost to member states for all UN activities in 1999 was the lowest in six years: the actual assessment for 1999 came to just over US $2 billion. The UN had 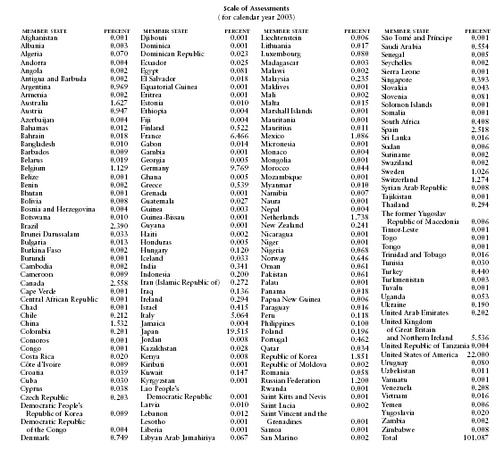 more cash than the previous year largely because of payments made by the United States to avoid losing its vote in the General Assembly. Total available cash at the end of 1999 jumped to some US $1.093 billion, from US $736 million in 1998. Amounts owed to the United Nations were also lower, at US $1.758 billion, down from US $2.031 billion a year earlier. And the level of the United Nations debt to its member states—some US $800 million—was also significantly lower than the previous three years.