The United Nations Budget - Procedure for determining the regular budget

Every other year, the Secretary-General presents detailed budget and appropriations estimates for the following biennium. (Until 1974 there were annual budgets.) These estimates are reviewed and sometimes revised by the Advisory Committee. The programmatic aspects are reviewed by the 34-member Committee for Program and Coordination. 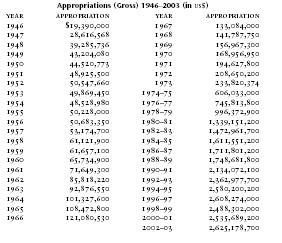 Aside from the regular budget, the General Assembly also allots a certain amount of money for unforeseen and extraordinary expenses and determines the level of the UN's Working Capital Fund, to which member nations advance sums in proportion to their assessed contributions to the regular budget. The fund is used to finance appropriations pending receipt of contributions and may also be drawn upon by the Secretary-General for other purposes determined by the General Assembly.

Since the expenses of the organization can never be precisely predicted, the Secretary-General reviews actual expenditures for the current year at each regular session of the General Assembly and proposes adjustments in the original appropriations. Usually, a supplemental budget is voted, but occasionally the General Assembly votes reductions.

Under UN regulations, a percentage of the earnings of the entire UN staff is deducted in lieu of taxes and credited to "income." In order to avoid double taxation of staff members of US nationality, they are reimbursed by the UN for the taxes (federal, state, and city) levied on their UN earnings. The withholdings from the salaries of UN personnel of all other nationalities are credited to the member states' accounts against their assessed contributions. After taking into account staff assessments and other items of income, the net estimated amount remaining must be raised through assessed contributions from member states.