The Secretariat - Structure and composition of the secretariat

The Secretariat services the other organs of the UN and administers the programs and policies laid down by them. As the scope and range of UN activities have widened, the staff of the Secretariat has increased in number and its organizational pattern has increased in complexity. The major elements of the Secretariat, variously designated as offices, departments, programs, conferences, and the like, are headed by officials of the rank, but not necessarily the title, of under secretary-general or assistant secretary-general. In 1987 there were 48 officials at those two levels in the Secretariat.

The Department of Political Affairs (DPA). The functions of five previous offices and units were integrated into the DPA. The department oversees the organization's efforts in preventive diplomacy and peacemaking, collects and analyzes information to alert the General Assembly and Security Council of impending crises, and carries out mandates handed down by the General Assembly and Security Council. DPA provides secretariat services to both bodies. It also provides electoral assistance to countries requesting help in strengthening the democratic process.

The Office for the Coordination of Humanitarian Affairs (OCHA). From September 1992 to April 1996, the UN launched 64 consolidated inter-agency appeals for humanitarian assistance seeking some US $11 billion in relief programs. To handle the increasing number of emergencies the organization's membership requested it to manage, the Secretary-General created the Department of Humanitarian Affairs (DHA), incorporating the functions of the UN Disaster Relief Office (UNDRO) and 11 other units of the Secretariat. Two new units were created: the Complex Emergencies Branch and the Inter-Agency Support Unit. In January 1998, the DHA was renamed the OCHA, as part of the Secretary-General's reform program at the time. The new body took steps to encourage more active inter-agency cooperation, and streamlined procedures for support of field coordination. The OCHA works to improve the delivery of humanitarian assistance to victims of disasters and other emergencies. It also acts as an advocate for humanitarian activities being considered by inter-governmental bodies. It was designed to provide quick needs assessments, field situation analyses, and early negotiations on access to emergency situations. A major feature of this department is interagency coordination that allows all the organizations of the UN system to make consolidated appeals for humanitarian assistance and to better track contributions from donor governments, UN agencies, and nongovernmental organizations.

The Department of General Assembly Affairs and Conference Services . This department consists of three divisions and one service. The Central Planning and Coordination Service provides central planning services for meetings and documentation, and coordinates conference services worldwide. The General Assembly and ECOSOC Affairs Division provides secretariat services and assistance to the General Assembly, the Economic and Social Council (ECOSOC), and the Trusteeship Council. The Interpretation, Meetings and Publishing Division provides interpretation services for all of the six official languages of the UN from and into each other. It also prepares verbatim records of meetings of the General Assembly, Security Council, and other bodies, and prepares and prints documents and other publications. The Translation and Editorial Division is responsible for translating all official United Nations documents, meeting records, publications and correspondence, from and into the six official langugaes. It also provides reference services and terminology services for authors, editors, interpreters, translators, and verbatim reporters.

The Department of Public Information (DPI). Under the reorganization, the Dag Hammarskjöld Library and the publishing services of the organization were transferred from the Office of Conference Services to DPI. The department, which creates press releases, publications, and radio and video programs publicizing the work of the organization, also took on the activities that had been handled by the former Office of the Spokesman for the Secretary-General. Many of DPI's field offices were integrated into the field offices of the UN Development Programme (UNDP) for substantial savings. DPI's work was facilitated by the installation of an electronic mail system connecting peacekeeping missions, information centers and UNDP offices— increasing headquarters' contact with its far-flung staff.

The Department of Management (DM). This department has a number of offices and divisions, including: the Treasury; the Office of Human Resources Management; the Integrated Management Information System Project; the Procurement Division; and the Archives and Records Management Section.

The Office of Internal Oversight Services (OIOS). In August 1993, the Secretary-General announced the creation of a new Office of Inspections and Investigations, headed by an assistant secretary-general, which would incorporate various former units of the DAM dealing with audit, management advisory services, evaluation, and monitoring. In July 1994, the General Assembly strengthened the office, and changed its name to the Office of Internal Oversight Services (resolution A/218B [29 July 1994]). The General Assembly stipulated that the head of the new office, at the level of undersecretary-general, should be an expert in the fields of accounting, auditing, financial analysis and investigations, management, law, or public administration. It further stipulated that the individual should serve only one five-year term, and that the post would not be subject to geographical distribution limits. The watchdog office was given wider independence to investigate possible fraud and abuse within the organization. It is assisted in its task by the Integrated Management Information System (IMIS), a major hardware and software upgrade that allows greater monitoring and audit capabilities through electronic audit trails. The creation of this office had long been sought by industrialized countries concerned that their contributions to the United Nations were being wasted by fraud and abuse.

The Office of Legal Affairs (OLA). This office advises the organization and the Secretary-General on legal matters. For example, the OLA has provided advice on numerous activities related to the International Criminal Tribunals for the former Yugoslavia and for Rwanda. Under the 1992 reorganization, it also assumed responsibility for the Office for Ocean Affairs and Law of the Sea. The OLA also provides a range of advice and assistance on issues relating to treaty law and technical aspects of treaties.

Besides the above departments, the Centre for Human Rights, formerly a division, had its activities greatly expanded by a series of new mandates by the General Assembly, ECOSOC, the Commission on Human Rights, and expert groups in the human rights field. It is the principal entity of the UN Secretariat dealing with human rights issues, and is responsible for supervising the ratification and implementation of the international human rights agreements. The Secretary-General, in his 1993 report (A/48/428), stated that the activities of the Centre for Human Rights were evolving from standard-setting to furthering the implementation of a universal culture of human rights. The center is 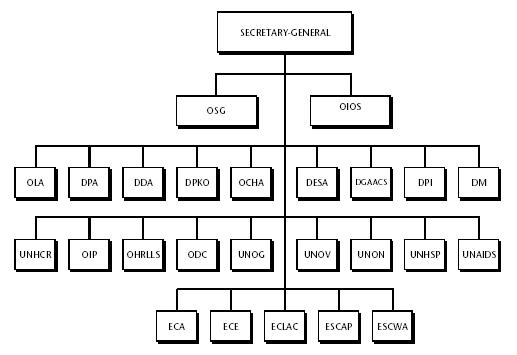 responsible for following up the recommendations of the Second World Conference on Human Rights held in Vienna in June 1993. Recognizing this, the 47th session of the General Assembly authorized additional financial resources for the center. The center is headed by an assistant secretary-general who reports directly to the Secretary-General.

Directly below the ranks of undersecretary-general and assistant secretary-general are directors of main subdepartments and chiefs of specific bureaus within the major organizational units. Below them is the professional staff: personnel with qualifications as administrators, specialists, technical experts, statisticians, translators, editors, interpreters, and so on. Staff in the category of general services include administrative assistants, clerical workers, secretaries, typists, and the like. Manual workers, such as building maintenance staff, are separately classified.

Personnel at the professional level and above are recruited in the various member countries of the UN and, when serving out-side their own country, are entitled to home-leave travel, repatriation grants, and related benefits. General service personnel include a number of nationalities, but they are recruited locally and are not selected according to any principle of geographical representation. The majority of general service staff employed at UN headquarters are US citizens.

Problems of Staff Appointment According to Equitable Geographical Distribution

UN member governments attach great importance to having a fair proportion of their nationals employed in the Secretariat. The 1962 General Assembly recommended that in applying the principle of equitable geographical distribution, the Secretary-General should take into account members' financial contributions to the UN, the respective populations of the member countries, the relative importance of posts at different levels, and the need for a more balanced regional composition of the staff at the director level. It further recommended that in confirming permanent contracts (UN staff are initially hired on the basis of one-year contracts), particular account should be taken of the need to reduce underrepresentation of some member states.

The 1975 General Assembly reaffirmed previously defined aims for UN recruitment policy and mentioned the following specifically: development of an international civil service based on the highest standards of efficiency, competence, and integrity; equitable geographic distribution, with no post, department, or unit to be regarded as the exclusive preserve of any member state or region; the recruitment of a greater number of qualified women for professional and senior-level posts; and the correction of imbalances in the age structure of the Secretariat.

One of the United Nations' most disturbing lapses relates to the status of women within the organization's own secretariat. The equality of men and women is a principle enshrined in the UN charter. However, while more than half of the Secretariat's general service (nonprofessional) posts are filled by women, until the 1990s, few women were appointed to the highest levels of management. No woman has even been seriously considered for the position of Secretary-General. The General Assembly called in 1978 for an increase in the number of women in posts at the professional level to 25% of total staff. The Secretary-General reported in 1987 that the number of women in the professional and higher categories had increased to 25.7% of the total, compared to 17.9% in 1977. In 1985, at the end of the United Nations Decade for Women, the number of women in professional posts (designated as P-1, P-2, P-3, P-4, P-5, D-1 and D-2) had risen to 29%. However, women held only 8% of the highest administrative posts (director level, including assistant secretary-general and undersecretary-general; designated D-1 and D-2). In response, the General Assembly raised its goal for women to 35% of all professional level posts, with 25% in the senior, D-level posts by 1995. Some of the United Nations' semiautonomous subsidiary bodies already achieved progress in equitable gender representation in their own secretariats. The United Nations Population Fund (UNFPA) reported in 1992 that 43% of its professional posts were occupied by women and set a goal of 50% of professional posts to be filled by women by the year 2000. UNICEF, which had women in 24.6% of its professional posts in 1986, increased that level to 35% in 1992. By June 1996, women accounted for 17.9% of the high level posts, and had received 40.3% of promotions within the last year. In 1992, in an effort to further strengthen the position of all women in the Secretariat, the first guidelines on sexual harassment were issued.

The International Civil Service Commission, established by the General Assembly in 1972, is responsible for making recommendations to that body for the regulation and coordination of service within the UN, the specialized agencies, and other international organizations that are part of the UN system. The commission is composed of 15 independent experts, appointed in their individual capacities for four-year staggered terms.

The Secretariat forum
The International Court of Justice The Secretary-General