The General Assembly - Functions and powers 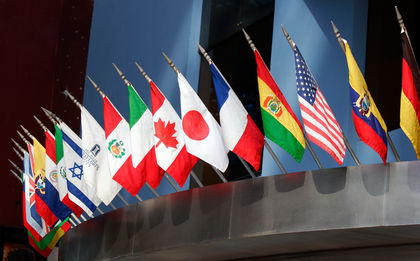 The central position of the General Assembly is firmly established in a series of charter provisions encompassing a wide range of functions and powers. First are the provisions setting forth its powers as the major deliberative body of the UN. With two exceptions (described below), the General Assembly has the right to discuss and make recommendations on any subject that falls within the scope of the charter itself, including the functions and powers of the other organs. Hence, it is in the General Assembly that all of the UN's important projects (except for the Security Council's peacekeeping operations) originate—those dealing with political questions, disarmament, economic and social development, human rights, decolonization of dependent territories, and development of international law.

The second group of charter provisions defining the pivotal position of the General Assembly concerns the financing of the UN. The General Assembly is empowered to "consider and approve" the budget of the organization (which includes that of the International Court of Justice at The Hague), and it also has the right to determine how the expenses shall be apportioned among the member nations.

Thus, the one UN organ on which all member states have the constitutional right to be represented is able to make its will felt throughout the organization, and indeed the entire UN system. Because its powers closely resemble those of a national parliament, the General Assembly has been described as a "world parliament." Parliamentary powers are not to be confused, though, with governmental powers. Except insofar as the Economic and Social Council, the Trusteeship Council, and the Secretariat are bound to carry out its requests, the General Assembly has no power to legislate and cannot enforce its decisions upon individual member nations. The only sanctions that the General Assembly can wield against an uncooperative member are the suspension of the rights and privileges of membership and expulsion from the organization, but even these sanctions can be invoked only on the recommendation of the Security Council. In effect, then, all General Assembly decisions are purely recommendations that reflect world public opinion; they have moral, though not legal, force. At the end of this chapter, an attempt is made to assess their effectiveness on this score.

Charter Restrictions on the Assembly's Power to Discuss and Recommend

The charter imposes two major restrictions on the General Assembly's powers to discuss and make recommendations. The first is embodied in the principle set out in Article 2, paragraph 7 of the charter, which states: "Nothing contained in the present Charter shall authorize the United Nations to intervene in matters which are essentially within the domestic jurisdiction of any state or shall require the Members to submit such matters to settlement…." This principle is not so restrictive as it might seem, for whether a given issue is or is not of a domestic character is decided by the General Assembly itself. It can and often does override by majority vote the attempt of a member nation to bar a particular topic from debate by invoking Article 2, paragraph 7 of the charter. The most notable case in point was the General Assembly's annual discussion of South Africa's apartheid policy (before it was abolished) despite South Africa's contention that the matter was within its domestic jurisdiction. (See section on "Apartheid in South Africa" in the chapter on Human Rights.)

Designed to secure maximum unity of action in moments of acute danger, Article 12, in fact, proved to be the chief obstacle to action of any kind during successive crises in the years just after World War II. The effectiveness of the entire system presupposed a spirit of unanimity among the great powers in their determination to end a particular dispute that appeared to threaten international peace and security. However, on each postwar occasion when the great powers might have been expected to display unanimity, the USSR and the four other permanent members of the Security Council took opposite sides in the dispute. As a result, precisely because each of them possessed the veto, all council action was deadlocked. Meanwhile, the General Assembly, prevented from taking action of its own accord because of Article 12, was forced to stand by helplessly.

It was the seriousness of the Korean crisis that finally impelled the General Assembly to take steps to break through its constitutional straitjacket. Following a deadlock in the council in 1950, when the USSR vetoed a United States-sponsored resolution in connection with the entry of the People's Republic of China into the Korean conflict on the side of North Korea, the General Assembly adopted a resolution that enabled it to circumvent the restrictions imposed by Article 12. This act, which came to be known as the "Uniting for Peace Resolution," provides that if the Security Council, because of lack of unanimity among its permanent members, fails to exercise its primary responsibility in the maintenance of peace, in a case where there appears to be a threat to the peace, breach of the peace, or act of aggression, the General Assembly shall consider the matter immediately with a view to making recommendations to members for collective measures, including if necessary the use of armed force. Although the Uniting for Peace Resolution thus considerably extends the General Assembly's powers with respect to maintenance of international peace and security, it in no way represents an attempt to usurp the Security Council's prerogatives. Nor does it attempt to arrogate to the General Assembly the enforcement powers that the charter accorded to the Security Council alone. Even under the Uniting for Peace Resolution, the General Assembly can only recommend that members undertake collective peacekeeping measures; it cannot oblige them to do so. Nor can it impose peacekeeping action against the will of the parties to a dispute. It must obtain their explicit consent to the presence of UN personnel—observer commissions, mediators, troops—in their territories.

wow, this is a nice educative and straight forward piece of literature.
2
TeShiera

THIS ARTICLE IS GOOD. AND IM LEARIN MORE ABOUT THE GENERAL ASSEMBLY.
3
Md. Humayun Kabir

i like this site very much. i am benifeted in this site.
4
Rimjim Ahom

HI, SINCE I AM A STUDENT OF ART'S STREAM & I WANT MORE INFORMATION ABOUT SHOCKTHERAPY AN THE RELATIONSHIP BETWEEN INDIA AN PAKISTAN, INDIA AN SRILANKA. AN ABOUT THE COLD WAR HOW IT HAPPEN AN THEIT CAUSES.
5
Sreelakshmi

Really this was a great boon to me..thnk u so much
6
NITHIN RAJ

I THINK THAT THIS SITE GAVE ME MORE ABOUT THAT I WANT...AND THANK YOU SO MUC
7
Kelly

This Helped Me Alot Thank You So Much!! I Love It Hahaha! :)
8
MULINDWA FIRIMON

is international law law?when u look at the general assembly which is referred 2 as the world parliament and it can not legislate then whats is its main function?and wast of all the security council took away all its powers
9
Rattas

wow never have i read something so straight foward and easy to understand.it helped me very much in my research
11
KC. Behera