Surveillance of the national trade policies of WTO member nations is a fundamentally important activity running throughout the work of the WTO. At the center of this work is the Trade Policy Review Mechanism (TPRM).

Reviews are conducted on a regular, periodic basis. The four biggest traders—the European Union, the United States, Japan and Canada—are examined approximately once every two years. The next 16 countries in terms of their share of world trade are reviewed every four years; and the remaining countries every six years, with the possibility of a longer interim period for the least-developed countries.

The review examines the overall trading practices of a WTO member rather than focusing on the legal compatibility of any particular trade policy or practice.

Reviews are conducted in the Trade Policy Review Body (TPRB)—established at the same level as the General Council. The TPRB conducts its review through the use of two documents: a policy statement prepared by the government under review, and a detailed report prepared independently by the WTO Secretariat. These two reports, together with the proceedings of the TPRB are published after the review meeting.

In addition to the TPRM, many other WTO agreements contain obligations for member governments to notify the WTO Secretariat of new or modified trade measures. For example, details of any new anti-dumping or countervailing legislation, new technical standards affecting trade, changes to regulations affecting trade in services, and laws or regulations concerning the TRIPs agreement all have to be notified to the appropriate body of the WTO. Special groups are also established to examine new free-trade arrangements (e.g. regional trade associations like NAFTA—The North American Free Trade Agreement) and the trade policies of acceding countries.

In 2000, new talks began on agriculture and services. At the WHO's Fourth Ministerial Conference held during November 2001 in Doha, Qatar, these talks were extended, and a number of other issues were added to the WTO agenda. The Doha Declaration sets 1 January 2005 as the date for completing all but two of the negotiations. Negotiations on the Dispute Settlement Understanding are to end in May 2003; those on a register of geographical indications for wines and spirits, by the Ministerial Conference in 2003. Progress is to be reviewed at the Fifth Ministerial Conference in Cancun, Mexico, in September 2003. A Trade Negotiations Committee (TNC) was also set up by the Doha Declaration, operating under the authority of the General Council.

The WTO also functions to settle trade disputes between member nations. Indeed, one of the goals of the WTO is to dissuade members from taking unilateral action against perceived violations of the trade rules and to instead seek recourse in the multilateral dispute settlement system and to abide by its rules and findings. Unlike the situation in a TPRM review, where a nation's overall trade policy is examined, a trade dispute between member nations usually involves the legality of a particular trade policy or practice. Which one member nation, the complainant, has called into question.

When any such trade dispute arises, the nations party to the dispute first engage in bilateral meetings between themselves (usually conducted by the nations' respective representatives in Geneva). If this fails the WTO Director-General, who, acting in an ex officio capacity, will try conciliation or mediation to settle the dispute.

If consultations and mediation fail to arrive at a solution after 60 days, the complainant can ask the Dispute Settlement Body (DSB) to establish a panel to examine the case. Generally, the DSB cannot refuse to establish a panel and must constitute the panel within 30 days of its establishment.

Each party to the dispute submits to the panel a brief on the facts and arguments in the case, in advance of the first substantive meeting. At that first meeting, the complainant presents its case and the responding party its defense. Third parties which notified their interest in the dispute may also present views. Formal rebuttals are made at the second substantive meeting.

The panel then submits an interim report, including its findings and conclusions, to the parties, giving them one week to request a review. The period of review is not to exceed two weeks, during which the panel may hold additional meetings with the parties. A final report is submitted to the parties and three weeks later, it is circulated to all WTO members.

If the panel decides that the measure in question is inconsistent with the terms of the relevant WTO agreement, the panel recommends that the member concerned bring the measure into conformity with that agreement. It may also suggest ways in which the member could implement the recommendation. Panel reports are adopted by the DSB 60 days after being issued, unless one party notifies its decision to appeal or a consensus emerges against the adoption of the report.

The WTO dispute settlement mechanism gives the possibility of appeal to either party in a panel proceeding. However, any such appeal must be limited to issues of law covered in the panel report and the legal interpretation developed by the panel. Appeals are heard by the standing Appellate Body established by the DSB.

An Appellate Body can uphold, modify or reverse the legal findings and conclusions of the panel. As a general rule, the appeal proceedings are not to exceed 60 days but in no case shall they exceed 90 days.

Thirty days after it is issued, the DSB adopts the report of the Appellate Body which is unconditionally accepted by the parties to the dispute—unless there is a consensus against its adoption. 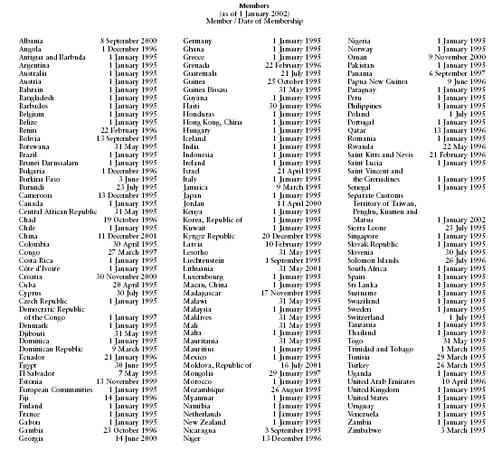 comply immediately, the member will be given a grace period (set by the DSB) to come into compliance. If it fails to act within this period, it is obliged to enter into negotiations with the complainant in order to determine a mutually-acceptable compensation—for instance, tariff reductions in areas of particular interest to the complainant.

If after 20 days, no satisfactory compensation is agreed, the complainant may request authorization from the DSB to suspend concessions or obligations against the other party. The DSB should grant this authorization within 30 days of the expiration of the grace period established by the DSB.

There is a peculiar component of the WTO structure, the Dispute Settlement Review Commission, that applies solely to the United States. The commission is composed of five appellate judges and is activated whenever a panel decision is made against the US. The commission analyzes the decision to determine whether it was unjustified, that is whether the panel exceeded its authority in making the decision or whether the panel went beyond the powers in the Uruguay round in making the decision. If the commission determines that three unjustified decisions occurred within any five year period a member of Congress can begin the process of removing the US from the WTO. It should be noted that since any member can withdraw at any time from the WTO, the existence of this commission does not explicitly enhance US power in the WTO. It was created primarily as a mechanism to assure the US Congress that the WTO would monitor itself against any anti-US bias and in fact the commission was established within the WTO to secure the support of Senator Robert Dole for US entry into the WTO.

The WTO Secretariat has also continued GATT's program of training courses. These take place in Geneva twice a year for officials of developing countries. Since their inception in 1955 and up to the end of 1994, the courses have been attended by nearly 1400 trade officials from 125 countries and 10 regional organizations. Beginning in 1991, special courses have been held each year in Geneva for officials from the former centrally-planned economies in transition to market economies.

The WTO Secretariat, alone or in cooperation with other international organizations, conducts missions and seminars and provides specific, practical technical cooperation for governments and their officials dealing with accession negotiations, implementing WTO commitments or seeking to participate effectively in multilateral negotiations. Courses and individual assistance is given on particular WTO activities including dispute settlement and trade policy reviews. Moreover, developing countries, especially the least-developed among them, are helped with trade and tariff data relating to their own export interests and to their participation in WTO bodies.

The WTO continues the GATT's participation in operating the International Trade Center (which it operates jointly with World Bank's Economic Development Institute). The Center responds to requests from developing countries for assistance in formulating and implementing export promotion programs as well as import operations and techniques. It provides information and advice on export markets and marketing techniques, and assists in establishing export promotion and marketing services and in training personnel required for these services. The Center's help is freely available to the least-developed countries. Since the beginning, GATT/WHO has trained more than 1,700 officials from developing countries.

An important aspect of the WTO's mandate is to cooperate with the International Monetary Fund, the World Bank and other multilateral institutions to achieve greater coherence in global economic policy-making.

Although the original agenda (established at a GATT meeting in Punta del Este, Uruguay in 1986) made no mention of a world trade body, a draft for such an organization was put forth in 1991 and quickly gained interest among many members for establishing such an organization.