The International Finance Corporation is the member of the World Bank Group that promotes the growth of the private sector in less developed member countries. The IFC's principal activity is helping finance individual private enterprise projects that contribute to the economic development of the country or region where the project is located. The IFC is the World Bank Group's investment bank for developing countries. It lends directly to private companies and makes equity investments in them, without guarantees from governments, and attracts other sources of funds for private-sector projects. IFC also provides advisory services and technical assistance to governments and businesses.

Within a few years of the founding of the International Bank for Reconstruction and Development (IBRD), it became evident that sufficient provision had not been made for financing the development of the private sector in countries looking to the UN system for aid. The Bank's charter restrained it from making equity (capital stock) investments or from lending money, directly or indirectly, to a private company without a governmental guarantee. Yet "venture capital" was the very thing needed in many developing countries to get a variety of productive enterprises underway, and the amount of venture capital available through private banking and investment channels was inadequate.

The first public suggestion for an international institution to close this gap appeared in a report, "Partners and Progress," which Nelson Rockefeller (then chairman of the advisory board of the Point 4 Program) had submitted to President Harry S. Truman in 1951. The matter was taken up by the staff of the IBRD, and in 1952, the Bank submitted proposals for such an institution to the UN Economic and Social Council. Some members of the Council, including the UK and the US, voiced the fear that the proposed institution might deter the flow of private capital to the developing countries. They also objected in principle to an inter-governmental organization's having the right to purchase shares in private companies.

The majority of members of the Economic and Social Council, however, strongly endorsed the idea of an international financial institution to aid private sector development, and by late 1954, a compromise was worked out. The International Finance Corporation, as originally established, could lend money to private enterprises without government guarantees, but it was not empowered to make equity investments, though loans with certain equity features, such as stock options, were allowed. The 31 countries necessary to launch the IFC pledged their consent over the next 18 months, and the IFC formally came into existence on 14 July 1956 as a separate legal entity affiliated with the IBRD.

The IFC's early investments often included such features as stock options and other profit-sharing devices in lieu of direct equity financing, but the terms were complex and difficult to negotiate, and it soon became apparent to all concerned that IFC's effectiveness was severely circumscribed by the restriction on equity investment. Proposals to amend the charter so as to permit the IFC to hold shares were put to the Board of Directors and the Board of Governors and approved in 1961—with the support, this time, of both the UK and the US. The revision of IFC's charter in 1961 to permit investment in equities made it possible to broaden and diversify operations, as well as to simplify the terms of investment. With the demand for IFC's services steadily expanding, the Board of Directors amended the charter again in 1965 to permit the IFC to borrow from the IBRD up to four times its unimpaired subscribed capital and surplus.

IFC's purpose is to foster economic growth by promoting private sector investment in its developing member countries. It accomplishes this by providing venture capital for productive private enterprises in association with local investors and management, by encouraging the development of local capital markets, and by stimulating the flow of private capital. The Corporation is designed to supplement, rather than replace, private capital. It plays an important catalytic role in mobilizing additional project funding from other investors and lenders, either in the form of cofinancing or through loan syndications, the underwriting of debt and equity securities issues, and guarantees. In addition to project finance and resource mobilization, IFC offers a full array of advisory services and technical assistance in such areas as capital market development, corporate restructuring, risk management, and project preparation and evaluation, and advises governments on creating an environment that encourages the growth of private enterprise and foreign investment.

Membership in the IFC is open to all members of IBRD. As of late 2002, IFC had 175 member states.

IFC's investments are funded out of its net worth—the total of paid-in capital and retained earnings. Of the funding required for its lending operations, 80% is borrowed in the international financial markets through public bond issues or private placements; the remaining 20% is borrowed from the IBRD.

Earnings and Borrowings . IFC's net income for fiscal year 2002 was US $215 million; paid-in capital was US $2,360 million; retained earnings were US $3,938 million; and borrowings amounted to US $16,581 million. IFC may borrow from the IBRD for use in its lending operations as long as the Corporation's total borrowings do not exceed four times its unimpaired subscribed capital and surplus.

Disbursements. In 2002 IFC approved 204 new projects; total financing approved, including syndications and underwriting was US $5.8 billion. The total project costs of commitments was US $15.5 billion. Since its founding in 1956 and through 2002, IFC committed more than US $34 billion of its own funds and arranged US $21 billion in syndications and underwriting for 2,825 companies in 140 developing countries.

Unlike the IBRD, IFC lends to private companies and does not accept guarantees from host-country governments. It also makes equity investments in developing-country businesses, and mobilizes additional loan and equity financing in the international financial markets. Because of the success of IFC's operations, its bond issues in the international markets have earned triple-A ratings from Moody's and Standard and Poor's.

IFC is the single largest source of direct financing for private sector projects in developing countries. Although IFC invests and lends on market terms, it does not compete with private capital. It finances projects unable to obtain sufficient funding on reasonable terms from other sources. Normally, IFC does not finance more than 25% of total project costs, so as to ensure that most of the project financing comes from private investors and lenders. And while IFC may buy up to 35% of the stock of a company, it is never the largest shareholder and does not take part in a firm's management. But since IFC does not accept government guarantees, it shares all project risks with its partners.

IFC finances the creation of new companies as well as the expansion or modernization of established companies in sectors ranging from agribusiness to manufacturing to energy to mining. A number of IFC projects involve building up the financial sectors of developing countries, for example by financing the creation of institutions such as investment banks and insurance companies.

IFC can provide loans, equity investments, and arrange quasi-equity instruments—in whatever combination is necessary to ensure that a project is soundly funded from the outset. The Corporation can provide additional financial support through contingent financing or full or partial guarantees of other sources of financing. In the past few years, IFC has made derivative products, such as currency and interest rate swaps, available to companies in developing countries. It has intermediated several such swaps for companies in Bolivia, Egypt, Ghana, and Mexico, helping them gain access to risk-management techniques commonly used by companies in industrialized countries but not normally available to companies in the developing world.

The IFC's history has been marked by growth in the number and size of investments and by a continued search for new ways to assist its member countries. An improved policy environment in many of IFC's developing member countries has helped the Corporation to make a larger contribution to economic development. Helping companies in developing countries achieve a proper balance between debt and equity financing is a key IFC objective.

In addition to approving debt and equity financing for its own account, in 2002 the Corporation approved the mobilization of US$ 3.61 billion in financing from other investors and lenders through loan syndications and the underwriting of securities issues. It also mobilized considerable cofinancing. Thus, for every US$ 1 of financing approved by IFC for its own account, other investors and lenders will provide US$ 4.75.

The efficient provision of services in such sectors as power, water, transportation, and communications is critical to successful private sector development. A growing number of IFC's member countries are opening these sectors, once the preserve of the state, to private investment and management.

The countries of Eastern and Central Europe and the former Soviet republics are a new focus of IFC's work. IFC's role includes financing private-sector projects and advising governments on creating a modern financial sector, selling off state-owned enterprises, and attracting foreign investment.

IFC advised governments officials in Russia and Ukraine on different techniques for privatizing state enterprises, and developed privatization programs that can be used as models by local authorities in both republics. It helped design and implement the auction of small enterprises in three regions in Russia—Nizhny Novgorod, Volgograd, and Tomsk—and in the city of L'viv, Ukraine, and produced a manual on the privatization of small enterprises.

In many developing countries small-scale entrepreneurs with promising ideas are often unable to get the financing or advice they need to start or expand businesses. IFC has set up project development facilities in Sub-Saharan Africa, Central America and the Caribbean, the South Pacific Islands, and Poland to help entrepreneurs prepare project proposals. Although these facilities do not themselves fund projects, they help entrepreneurs find loans and equity financing on reasonable terms. The Africa Enterprise Fund, established in 1989, is a special program devoted to financing small and medium-sized businesses in Sub-Saharan Africa.

Advisory Services and Technical Assistance. In the course of conducting project appraisals, IFC may provide considerable technical assistance to companies—for example, by helping them select a technical partner or a technology, identify markets for their products, and put together the most appropriate financial package. The Corporation also advises companies on financial restructuring, helping them reduce their debt.

IFC advises member governments on an array of issues, such as capital markets development. It helps governments create and put in place the regulatory, legal, and fiscal frameworks necessary for financial institutions to operate efficiently. IFC also provides advice on privatization and on restructuring state enterprises slated for privatization. The Foreign Investment Advisory Service, established by IFC and operated jointly with the Multilateral Investment Guarantee Agency and IBRD, advises governments on attracting direct foreign investment. 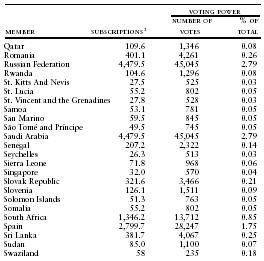 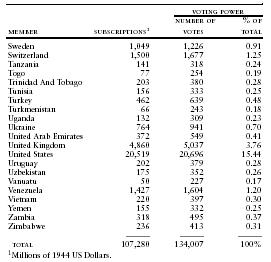 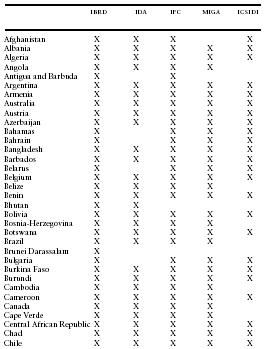 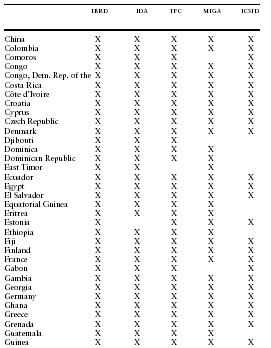 Executive Directors of the IBRD, IFC, and IDA, and IFC Voting Power
(on 1 February 2003)

Executive Directors of the IBRD, IFC, and IDA, and IFC Voting Power
(on 1 November 2002) 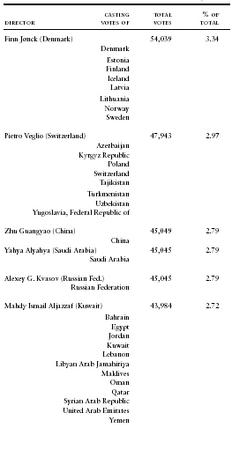 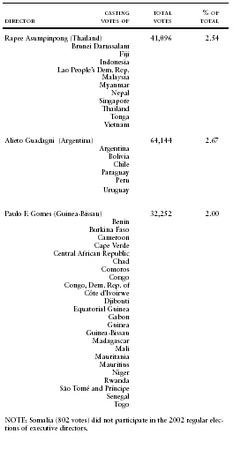