The world's poorer countries have gone heavily into debt to finance their development. The total outstanding debt of 90 such countries rose from US $51 billion in 1970 to an estimated US $485 billion in 1985. Annual interest and amortization charges on this debt had, by 1985, reached over US $100 billion. Many countries have long since arrived at the point where they can no longer afford to raise all the development capital that they are in a position to use at ordinary rates of interest and in the time span of conventional loans, IBRD loans included.

The International Development Association (IDA), an affiliate of the World Bank, was established in 1960 to promote economic development in the world's poorest countries—those that cannot afford to borrow from the IBRD. It is the largest single multilateral source of concessional lending to low-income countries. The following criteria are used to determine which countries are eligible to borrow IDA resources: relative poverty, defined as GNP per capita below an established threshold (as of September 2002, US $875; lack of creditworthiness to borrow on market terms and therefore a need for concessional resources to finance the country's development program; good policy performance, defined as the implementation of economic and social policies that promote growth and poverty reduction. In late 2002, 81 countries were eligible to borrow from the IDA. At the time, these countries were home to 2.5 billion people, comprising half of the total population of the developing nations, and 1.1 billion of these people survived on incomes of US $1 or less a day.

The IDA's loans are interest-free and repayable over very long terms, with extended grace periods. As a result, the IDA's resources, unlike the resources of a regular lending institution, must be regularly replenished through contributions if the agency is to continue in business.

The creation of an international agency such as the IDA was discussed in the UN at various times during the 1950s. A report drawn up in 1951 by a group of experts on financing and economic development referred to the need for an "international development authority." Although such proposals were at first opposed by the US, the IDA as it was finally launched was largely the result of US initiative. In 1958, the US Senate passed a resolution introduced by Senator A. S. ("Mike") Monroney calling for cooperative international action along these lines. On 1 October 1959, the IBRD's Board of Governors approved, without objections, a motion of US Secretary of the Treasury Robert Anderson that a new agency, under the name International Development Association, be established as an affiliate of the Bank.

The debate that preceded the Board's action revealed potential disagreements among members of the Bank on a number of points, such as the terms that the IDA should set for its loans, the permissible restrictions that countries subscribing to the IDA's capital could place on the use of funds supplied in their national currencies, and related matters. Rather than decide these matters itself, the Board of Governors asked the Executive Directors of the IBRD to draw up Articles of Agreement for the IDA, which would then be submitted to the Bank's member governments.

The IDA's Articles of Agreement were accordingly drafted by the Executive Directors of the IBRD and early in 1960 transmitted to the member governments of the Bank. The next step was for those governments desiring to join the IDA to take whatever legislative or other action might be required to accept membership and to subscribe funds.

The new lending association came into existence on 24 September 1960, when governments whose subscriptions to its capital aggregated US$ 650 million, or 65% of the projected one-billion-dollar goal, had accepted membership. The IDA started operations in November of that year.

In the preamble to the Articles of Agreement, the signatory governments declare their conviction that mutual cooperation for constructive economic purposes, healthy development of the world economy, and balanced growth of international trade foster peace and world prosperity; that higher standards of living and economic and social progress in the less developed countries are desirable not only in the interest of the latter but also for the international community as a whole; and that achievement of these objectives would be facilitated by an increase in the international flow of capital, public and private, to assist in the development of the resources of less developed countries.

As stated in its Articles of Agreement, the purposes of the IDA are "to promote economic development, increase productivity, and thus raise standards of living in the less-developed areas of the world included within the Association's membership, in particular by providing financing to meet their important developmental requirements on terms which are more flexible and bear less heavily on the balance of payments than those of conventional loans, thereby furthering the developmental objectives of the [IBRD] and supplementing its activities."

As of September 2002, IDA had 164 member countries, of which 81 were eligible to borrow. Between its founding in 1960 and 2002, IDA lent almost US $135 billion to over 100 countries. It lends, on average, about US $6–7 billion a year for different types of development projects. When a country's Gross National Product (GNP) exceeds IDA's eligibility threshold and it becomes creditworthy to borrow from IBRD, it is no longer eligible for IDA's interest-free credits. It may then borrow from IBRD at market rates. As of 2002, some countries, such as India and Indonesia, were eligible for a combination of financing from both IBRD and IDA. Such countries are known as "blend" borrowers. Countries that once borrowed from IDA but, as of 2002, were too prosperous to qualify included China, Costa Rica, Chile, Egypt, Morocco, Thailand, and Turkey.

Since the IDA relies entirely on the IBRD's staff and facilities for all its activities, it reimburses the Bank through a management fee for administrative expenses incurred on its behalf.

The IDA's funds are obtained from three main sources: members' subscriptions; periodic "replenishments" provided by richer members and certain special contributions; and transfer of income from the IBRD and repayments on IDA credits.

While IBRD raises most of its funds on the world's financial markets, IDA is funded largely by contributions from the governments of the richer member countries. As of September 2002, their cumulative contributions since IDA's beginning totaled US $109 billion. Donors get together every three years to replenish IDA funds. The 13th replenishment finances projects over the three years beginning 1 July 2002. Funding for the 13th Replenishment will allow IDA to lend about US $23 billion, of which donors' contributions will provide a little over half.

Aside from their contributions under replenishment agreements, a number of countries have agreed over the years to make voluntary increases and special contributions in excess of their normal shares. Since 1964, the IDA has received regular support from the IBRD through the transfer of some of its net income not needed for the Bank's own purposes. When combined with repayments by IDA borrowers and contributions from the World Bank's net income, the 13th replenishment will finance a total of about US$ 23 billion in development credits.

IDA provides credits to its borrowers, interest-free with a 35-to 40-year final maturity and a 10-year grace period. Although IDA does not charge interest, it does charge a small administrative fee of 0.75% against the outstanding balance of credits to meet administrative expenses. There is also a commitment fee of 0.5% of 50 basis points, but this has been waived since fiscal year 1989. IDA's credits are thus highly concessional with a grant element of about 85%.

While the IDA's financial terms are liberal, its economic and technical criteria for development credits are exactly the same as those applied by the IBRD in lending on conventional terms. Each credit must be justified by the borrowing country's economic position, prospects, and policies. Credits are extended only for high-priority purposes that, in the words of the IDA's Articles of Agreement, will "promote economic development, increase productivity, and thus raise standards of living in the less-developed areas of the world."

Since the IDA's resources have been considerably less than the need of developing countries for additional external finance on easy terms, they must be carefully rationed on the basis of need and prospects for their most effective use. Borrowing countries typically have per capita GNPs below an established threshold. Most eligible countries have incomes below US $400 per capita.

IDA has taken an active role in helping governments undertaking structural adjustment to protect and expand social and environmental programs. It supports rural development programs and projects which aim to increase agricultural productivity and ensure adequate food supplies. IDA also finances projects that give special attention to improving women's incomes and status in their communities. The Association has markedly increased its support for population, health, and nutrition projects.

Environmental concerns have been integrated into all aspects of IDA's operations. The Association is helping borrowers develop their own Environmental Action Plans to identify the policy changes and investments that are required for environmentally sustainable development.

In fiscal 2002, IDA disbursed US $6.6 billion; of this amount, nearly half went to countries in sub-Saharan Africa, one-third to South Asia, 10% to East Asia and the Pacific, 8% to Eastern Europe and Central Asia, and the remainder to poor countries in North Africa and in Latin America. 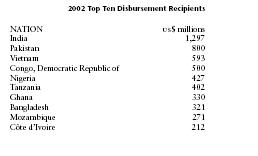 IDA is the largest single source of multilateral concessional funds. Its annual net disbursements of around US$ 6 billion are about 30% of net concessional multilateral disbursements, and 12% of Official Development Assistance. The Association also helps mobilize and coordinate aid from other multilateral organizations and donor countries. IDA's involvement is often a catalyst for other bilateral aid donors and regional development banks to participate in providing assistance. On average, for every dollar IDA commits, 50 cents of cofinancing is mobilized.

This piece of information has been quite helpful in my quest for research materials relevent to my scope of observation and discipline.