Ukraine has displayed positive growth in recent years, but long term growth will require certain market reforms. The economy is burdened by excessive government regulation, and major sectors such as energy and telecommunications remain to be privatized. Corporate governance is weak, and corruption is rampant. Ukraine receives aid from the IMF, although the relationship between those two entities has not always been successful; Ukraine has had problems adhering to IMF monetary conditions.

The US Central Intelligence Agency (CIA) estimates that in 2002 Ukraine's central government took in revenues of approximately $10.2 billion and had expenditures of $11.1 billion. Overall, the government registered a deficit of approximately $900 million. External debt totaled $11.8 billion. 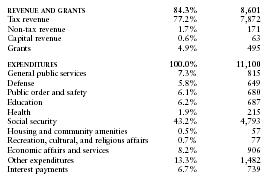