Ukrainians, Russians, and Belarussians belong to the eastern branch of the Slavic peoples, all of which trace their origins to medieval Kievan Rus. Kievan Rus was established in the 9th century AD . St. Volodymyr the Great, one of the most celebrated rulers of Kievan Rus, adopted Christianity as the national faith in 988. Internal strife in the 12th century and the Mongol invasion in the 13th led to the ultimate destruction of Kievan Rus as a major power. Halych-Volhynia in Western Ukraine, however, became the new political center until it fell to Polish-Lithuanian rule in the 14th century. During the following centuries Ukraine found itself the object of power struggles among its more powerful neighbors.

In a protracted struggle against Poland, Ukrainian Cossacks were able to establish an independent state in the 16th and 17th centuries. To safeguard Ukrainian independence from the Poles, Ukraine concluded the Treaty of Pereyaslav in 1654 with Moscow. The nature of this agreement has generated much historical controversy: Russian historians claim that, as part of the agreement, Ukraine accepted Moscow's rule, while Ukrainians claim that Ukraine was to retain its autonomy. The ensuing war between Russia and Poland resulted in the partition of Ukraine. Most of the rest of Ukraine's territory was incorporated into the Russian Empire with the partition of Poland in 1795. Small parts of Ukrainian territory to the west were absorbed by the Hapsburg Empire.

A Ukrainian national movement arose in the 19th century. Later, the collapse of the Tsarist regime and the chaos of the Russian revolution in 1917 allowed Ukraine to assert its independence. In April 1917, the National Ukrainian Assembly met in Kiev and in November proclaimed the creation of the Ukrainian People's Republic. When the Bolsheviks formed a rival 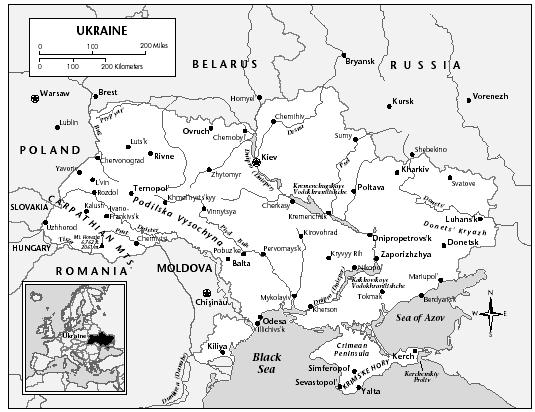 Ukrainian Communist government, the National Assembly proclaimed the independence for Ukraine on 22 January 1918.

The new government, however, could not maintain its authority in the face of civil strife and the threat of the approaching Bolshevik, pro-Tsarist, and Polish forces. By 1920, eastern Ukraine fell to the Bolsheviks and became the Ukrainian Soviet Socialist Republic while Poland occupied most of western Ukraine. Small areas of the west went to Romania, Hungary, and Czechoslovakia.

Early Soviet policy allowed for cultural autonomy and local administration by Ukrainian Communists. But Stalin changed this liberal policy in the 1930s when he initiated strict Russification and persecution of Ukrainian nationalists. This policy culminated in the Soviet-engineered famine of 1932–33 that resulted in the death of 7 to 10 million Ukrainians.

The 1939 Nazi-Soviet pact assigned Poland's Ukrainian territory to the Soviet sphere of influence. When Germany invaded the Soviet Union in 1941, Ukrainian nationalists in L'vin proclaimed the restoration of the Ukrainian state. The Germans arrested these nationalists and turned Ukraine into a German colony. When it became clear that the Nazis wanted to enslave them and not liberate them, a resistance movement led by nationalists fought both the Soviet and German armies. During World War II, Ukraine lost six million people through death or deportation and a total of 18,000 villages were destroyed.

The Ukrainian resistance movement continued to fight in Soviet Ukraine (the western Ukraine which had been part of Poland had been incorporated into the Ukrainian S.S.R.). It was not until the 1950s that they were completely defeated by the better-equipped Soviet Red Army.

In March 1990, semi-free elections for parliament were held. The Communist-dominated parliament declared Ukraine a sovereign state on 16 July 1990. On 24 August 1991, following the failed coup in Moscow, the parliament proclaimed the independence of Ukraine and declared that only the constitution and laws of Ukraine were valid on its territory. On 1 December 1991 the citizens of Ukraine confirmed this proclamation with a 90.3% vote in favor of independence. At the time of this referendum, Leonid Kravchuk was elected as the first president.

Ukraine joined Russia and Belarus in creating the Commonwealth of Independent States (CIS) in December 1991. This agreement was meant to facilitate coordination of policy in various fields. But despite their efforts, Ukrainian-Russian differences arose in several areas, including the command and control of nuclear weapons, the formation of a unified military command, and the character and pace of economic reform.

In light of the 1986 Chernobyl nuclear power plant accident, Ukraine declared its intention to become a nuclear-free state. However, this process progressed much more slowly than expected. The lack of fuel resources and disagreements with Russia over pricing had induced the government to keep the Chernobyl plant running. The START I agreement received the Ukrainian parliament's conditional ratification in November 1993 and unconditional ratification in February 1994, but the transfer of nuclear weapons to Russia did not occur as smoothly as planned. On 6 May 1992 it was announced that all Ukrainian tactical nuclear weapons had been shipped to Russia for dismantling. However, Ukraine cited Russia's failure to dismantle these weapons, inadequate compensation, and security concerns as the reasons for not turning over its entire strategic arsenal.

The CIS countries agreed to a unified nuclear command, but Ukraine declared its intent to create its own national conventional military and opposed any efforts to create a unified CIS conventional force. President Kravchuk declared all conventional forces on Ukrainian territory to be the property of Ukraine. This has given rise to disputes and disagreements about the Black Sea fleet, to which Russia has also laid claim.

Since its independence, Ukraine has experienced unrest in some of the predominantly Russian areas in the east and southeast. Crimea is the most notable example, declaring independence on 6 May 1992. At the same time the Russian parliament approved a resolution that declared the 1954 Soviet grant of the Crimea to Ukraine unconstitutional and void. This resolution, however, was rejected by Russian president Boris Yeltsin. Demands for secession in Crimea have continued to complicate Ukrainian-Russian relations.

Ukraine adopted a new constitution in June 1996 establishing a presidency (elected for a five-year term) and a one-chamber parliament called the Supreme Council (elected for a four-year term). Under transitional provisions, President Leonid Kuchma, elected over incumbent Leonid Kravchuk in 1994, was to serve until elections in 1999. The Supreme Council adopted a new civil code in June 1997. In the same year, Ukraine signed a 10-year friendship treaty with Russia and an agreement with Western nations on shutting down the Chernobyl nuclear plant by 2005. It was shut down in 2000. Public discontent with the slow pace of economic reforms was evident in the strong showing by the Communist Party in the 1998 legislative elections, in which it won 25% of the vote (116 of 450 seats). However, support for the party did not translate into support for union with Russia, proposed by Petro Symonenko, the party's candidate in the 1999 presidential elections. Leonid Kuchma was reelected in a November 1999 runoff election with 56% of the vote and nominated central bank chairman Victor Yushchenko to be prime minister. Soon after taking office, Yushchenko reached a restructuring agreement with foreign bond holders to avoid default on the nation's $2.6 billion foreign debt. As the new century began, Ukraine's much-needed economic reforms remained stalled by the long-standing problems of corruption and political stalemate between reformists and their parliamentary opponents.

In November 2000, the body of Ukrainian journalist Georgiy Gongadze was found decapitated: opposition demonstrators alleged Kuchma was involved in the murder of the journalist who was critical of the administration, and there were calls for Kuchma's impeachment. Kuchma denied the allegations, but in February 2001, the EU called for an inquiry into the journalist's murder. In September 2002, an ad hoc commission set up by parliament to investigate Gongadze's murder recommended that criminal charges be brought against the president and other top officials, based on tape recordings of a meeting at which Kuchma allegedly asked security officials to "take care" of the journalist. Anti-Kuchma protests were held throughout the country to call for the president's resignation. All six national television stations were off the air on the morning of the 16 September demonstrations, purportedly for "maintenance." Many protesters were beaten and arrested. In October, the Kiev Court of Appeals opened a criminal case against Kuchma, based upon the allegations of his involvement in the murder.

In parliamentary elections held on 30 March 2002, Ukrainians voted for many opposition parties, although parties opposed to Kuchma alleged widespread fraud. In April, Yushchenko's government was dismissed following a no-confidence vote in parliament. Although Yushchenko is respected in the West for fighting corruption and furthering economic reforms, he is unpopular with many Ukrainian businessmen, who are seen to be corrupt. Presidential elections are scheduled for 2004, and Kuchma is constitutionally barred from running for a third term. In 2002, he announced plans to amend the constitution and weaken his executive powers. This was seen as a move to transfer power to parliament, in the event that a reformer such as Yushchenko would be elected president. Kuchma's plans also included splitting parliament into two chambers. In March 2003, Yushchenko stated he feared the new amendments would postpone presidential elections for two years, and extend Kuchma's rule until 2006. Tens of thousands of protesters nationwide took to the streets in March, calling once again on Kuchma to resign for abuse of office, arms dealing, vote-rigging, corruption, the involvement in Gongadze's murder, and for impoverishing the country.

The last Soviet-era ICBM nuclear missile silo in Ukraine was destroyed in October 2001, completing Ukraine's obligations under the START I accord. That month, a Ukrainian air force pilot accidentally fired a missile at and shot down a Russian airliner over the Black Sea, killing all 78 on board, including 23 children. Defense Minister Olexander Kuzmuk resigned in acknowledgment of the military's responsibility for the downing. In July 2002, 83 people were killed when a military aircraft crashed into a crowd of spectators at an air show. Then-Defense Minister Vladimir Shkidchenko resigned, and head of the air force Viktor Strelnikov and head of the general staff of the Ukrainian armed forces, Pyotr Shulyak, were also replaced.