The financial crisis of 1998 caused a large outflow of capital, and reserves fell to less than a third of their level in 1997. Due to a major exchange rate adjustment that made Ukrainian products more competitive in both external and internal markets, reserves recovered somewhat in 1999. From June 2000 to July 2001, reserves increased dramatically, back to pre-1998 levels. This growth is surprising in light of the fact that the country has received almost no external funding since 1998, when foreign investors began avoiding Ukraine. Following the 1998 devaluation of the hryvnia, trade surpluses drove the growth in reserves, and the balance of payments situation improved. Reserve growth also improved due to Ukraine's default on its sovereign debt. As of the early 2000s, Ukraine's balance of payments position was expected to be heavily influenced by its trade with Russia.

The US Central Intelligence Agency (CIA) reports that in 2001 the purchasing power parity of Ukraine's exports was $17.3 billion while imports totaled $17.1 billion resulting in a trade surplus of $200 million.

The International Monetary Fund (IMF) reports that in 2001 Ukraine had exports of goods totaling $17.1 billion and imports totaling $16.9 billion. The services credit totaled $4 billion and debit $3.58 billion. The following table summarizes Ukraine's balance of payments as reported by the IMF for 2001 in millions of US dollars. 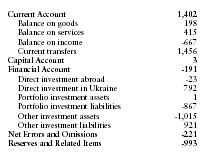