Swiss railroads extend 4,406 km (2,738 mi). Nearly all of the railway system is electrified. Because of its geographical position, Switzerland is an international railway center, with traffic moving from France, Germany, Austria, and northern Europe through the Simplon, Lötschberg, and St. Gotthard tunnels to Italy and southern Europe. 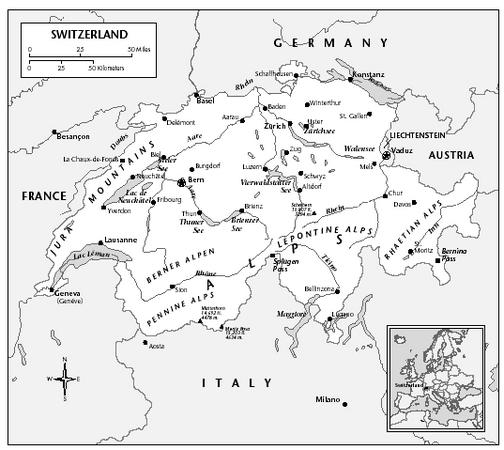 Inland waterway (65 km/40 mi) traffic is an important component of Swiss transportation. Basel, the only river port, has direct connections to Strasbourg, the German Rhineland, the Ruhr, Rotterdam, and Antwerp. The Rhine-Rhône canal provides an alternative link between Basel and Strasbourg. There are twelve navigable lakes. During World War II, the Swiss organized a merchant marine to carry Swiss imports and exports on the high seas; in 2002, 26 ships totaling 509,943 GRT were in operation. Switzerland's merchant fleet is larger than that of any other landlocked nation.

There were 66 airports in 2001, 41 with paved runways. Swissair, partially owned by the federal and local governments, is the flag line of Switzerland. It has flights from the principal international airports at Zürich, Geneva (Cointrin), and Basel to major European cities, North and South America, the Middle East, Asia, and West Africa. In 2001, 16,914,800 passengers were carried on scheduled domestic and international flights, and 1,642 million freight ton-km (1,020 million freight ton-mi) of service.