The Swiss government has been known historically for maintaining a relatively high degree of austerity in comparison to its European neighbors. In 1991, the federal government incurred a budget deficit of over SwFr 1.5 billion, the first budget discrepancy in seven years. Cantonal budgets also were in deficit. These deficits continued throughout the 1990s, prompting governments at all levels to take further cost-cutting steps. As an international creditor, debt management policies are not relevant to Switzerland, which participates in the Paris Club debt reschedulings and is an active member of the OECD.

The US Central Intelligence Agency (CIA) estimates that in 2001 Switzerland's central government took in revenues of approximately $30 billion and had expenditures of $30 billion. 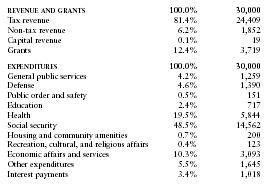 Hello, I'm a student from the University of Puerto Rico at Arecibo. I'm research investigation on Switzerland public finance. I need the most recent information.
The above information is helpful but from year 2001.
Is it possible to get the same information but from 2009? What site can you recommend?