In the past Switzerland typically had a foreign trade deficit. More recently, however, this imbalance was more than compensated for by income from services, investments, insurance, and tourism. Restructuring of enterprises in the 1990s, due to the strength of the Swiss franc, caused the export-oriented manufacturing sector to become highly successful. Exports of goods and services amounted to some 46% of GDP in 2000.

The US Central Intelligence Agency (CIA) reports that in 2002 the purchasing power parity of Switzerland's exports was $100.3 billion while imports totaled $94.4 billion resulting in a trade surplus of $5.9 billion. 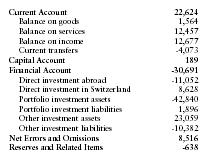