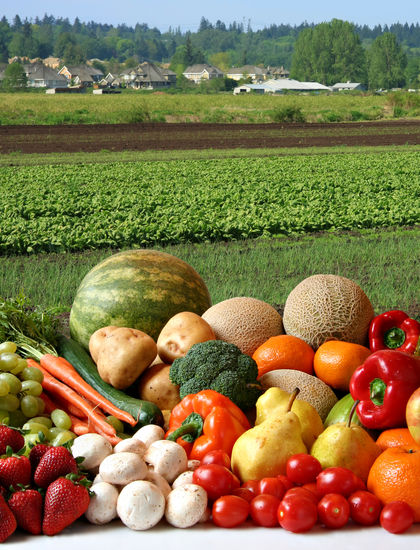 Some 444,000 ha (1,097,000 acres), or about 11% of the country's total land area, is under seasonal or permanent crops. Most of the cultivable land is in the Mittelland, or central plateau, and the cantons regularly producing the largest quantities of wheat are Bern, Vaud, Fribourg, Zürich, and Aargau. Soil quality is often poor, but yields have been increasing as a result of modern technology. In 2001, agricluture contributed 2% to GDP.

Swiss agricultural policy is highly regulated, with fixed prices and quota restrictions maintained on several products. Domestic production is encouraged by the imposition of protective customs and duties on imported goods, and by restrictions on imports. The Federal Council has the authority to fix prices of bread grains, flour, milk, and other foodstuffs. Production costs in Switzerland, as well as international exchange rates favorable to the Swiss franc, make competition with foreign products difficult. This highly protectionist system has led to excess production and mounting costs associated with the management of surpluses. The Uruguay Round and subsequent Swiss implementation of its provisions in July 1995 (along with rising costs in the agricultural sector) has forced the government to begin reforming its agricultural support system.

Hi,
I'm doing a Switzerland project in school right now for Geography! Your website has really helped me on agriculture and farming!
From
MURRON HARRISON
2
Karla

Hey,
I'm doing a speech on Switzerland and this website has helped me a lot thanks!
3
Grant Duarte

I'm doing a speech on Switzerland in school, and this helped me alot for Agriculture.
4
Christine W

Hi,
In school I am researching a country I'd like to immigrate to and I picked Switzerland. This really helped me on the agriculture section. Thank you soo much !
5
person

Thanks. I'm doing a project on switzerland for french class.I got to choose my country. So I chose this one! Your website has given me most of the information I needed. Again, THANKS!!!!!!!
6
K114

Thanks. I am doing an olympic country poster and this website was a great one. It especially helped me with the agriculture. I am very happy that i found this website it helps alot. I now hope that i get an excellent mark for my poster thanks.xxooxxooxxooxxoo
7
jacqueline

Hi:)
I am doing a project about switzerland for social studies.
your website helped me alot and i understood the subject better.
Thx for your help!
8
Alexandra Hane

I am doing a project for Geography on Switzerland, and this website helped me a lot. Thanks!!!! :)
9
Ben

Wow, this helped a lot with the agriculture aspect of a Switzerland project I am doing for Geography class. Thanks for making this webpage!
10
conneur

omg!!!!!!
we're ttaotally doing a project in school too!!!!!
and omg i can't even thank you enough for all this fabulous information
thanks alllll hehehehehehehehe :))))
11
Niyalish

hey thnks for the help but could someone tell me wat are some of the main foods people eat in switzeralnd? thnx yur site helped!!! answer my question plaes thnx again!!!
12
karli

this has really helped me in school for a project. I showed this to my friend and she loves it alot
13
Anika

I am doing a report, but seeing as how I am in elementary school this was a little hard for me to understand. I got it eventually, though, so thanks, but please make it a little easier to grasp.
14
Shilla Benard

I`m doing some question on type of agriculture practiced in Switzerland,this helped me a lot for my question.
15
cory

I am doing a project in schoolo write now for something that my school calls small small world and this website has helped a lot.
16
sascha

Thank you Advameg for making this website! I hope that you have updated it since 2008! It has helped a lot with my project for Switzerland.
19
Jack

Thanks, I'm doing a report on Switzerland, and I really need something for my 30 page essay.
20
Haley

Thank you soo much this website has helped me so much on my switzerland report for social studies.
21
David B

Hopefully the Swiss will keep their independence - Not subscribing to WTO and the global facist corporate economy. Destroyed the U.S. manufacturing, construction, service industry. in the last few years, all the high-rises in Charlotte, NC were built forigners.

A country should strive to produce its own food, shelters, energy, and all it's other necesseties -- and have a surplus. Swiszerland is what the U.S. should have been and would have been if the robber-barons hadn't taken back what we have taken from Britian. Swiss is one of the few cauntries left where "Independence" isn't a 4 letter word.
22
Harish

I am from India... Can I buy land and do farming in switzerlan?
23
tesfamichael afewerki

Wow that is so great and informative, because I have got vital ground on the field of agriculture from your website.thank you so much!!!
24
Comet

I'm doing a school project and on this site I got more than I bargained for! Normally in school
Projects I never learn anything, I put it in my own words and write it down but here I actally read
this for learning (and projects)! Thank you!! :)
25
SONAL DSA

IT HELPED ME IN MY SCHOOL PROJECT IN INDIA .THAT INFORMATION WAS SUPERB AND I GOT FULL MARKS. HATS-OFF TO YOU
26
kent harold durano

hahah its nice it helped me for my project in school in philippines for switzerland agriculture and histories :P
27
randomer

I am doing a project in french class about Switzerland and this website has really helped me ALOT!!
28
Chelsea

Like those above, I'm also doing a project on the economy of Switzerland (this country is friggin' amazing), because, well, it DOES have one of the most stable economies in the world. Thanks for providing all this helpful information. :)
29
Random

This was so Awe some Web site. I was doing a social studies, and I did it very well. Thank you so much.
31
Ellen

This is interesting, and I'm wondering if there is any factory farming in Switzerland? I've seen lots of cows in the fields, but it doesn't seem possible that those cows could produce all the milk for all the cheese that is produced...
32
Zaelon Sledge

this is a really good site. I suggest it to anyone.
35
ofcourceimawesome

Hi
I had a Geography project and i found this site...Suddenly everything became interesting!Thank you for your help!
36
kylee

thank you for this this has helped me so much with my report.
38
And

I hate this site this is the worst site I've ever been to. God, only idots have to love this site.
39
adel

Hi
I need to alot of information and video about Sustainable of agriculture.
40
lily sixby

This website helped me a lot. I have to research Switzerland because I have a social studies project so thanks!
41
Elizabeth

Thanks for creating this website it's helping me alot. I'm doing a report on Switzerland and this website is so good . Thank you
42
magda

does Switzerland use pesticides on their crops? for a project please help
43
Alyssa

This really helped with my Switzerland project thanks