The financial year extends from 1 July to 30 June. Estimates are prepared in the autumn by the Ministry of the Budget and examined by the Riksdag early the following year. The budget contains two sections: an operating budget and a capital budget, the latter generally representing investments in state enterprises. The policy of running a surplus on the budget in boom years and a deficit in depression was used in the period between the two world wars and has been continued as a way of combating inflation. From 1982 to 1989, the budget balance improved from a deficit equivalent to about 13% of GDP to a surplus of nearly 2% of GDP. In 1990, however, a deficit reappeared that was equivalent to 1.2% of GDP. In 1991 and 1992, the budget deficits widened to 4.3% and 9.6% of GDP, respectively. The deficit increased to 12.3% of GDP in 1993, before beginning a sharp decline due to austerity measures, put in place by the Social Democrats; although smaller, deficits remained the norm through the late 1990s. A surplus of 8% of GDP was projected for 2001. 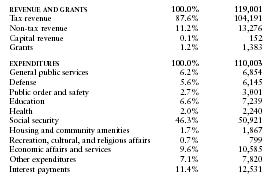