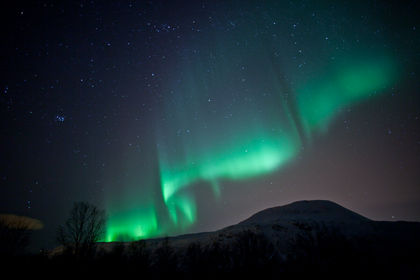 Because of maritime influences, particularly the warm North Atlantic Drift and the prevailing westerly airstreams, Sweden has higher temperatures than its northerly latitude would suggest. Stockholm averages –3° C (26° F ) in February and 18° C (64° F ) in July. As would be expected from its latitudinal extent, there is a wide divergence of climate between northern and southern Sweden: the north has a winter of more than seven months and a summer of less than three, while Skane in the south has a winter of about two months and a summer of more than four. The increasing shortness of summer northward is partly compensated for by comparatively high summer temperatures, the greater length of day, and the infrequency of summer cloud; the considerable cloud cover in winter reduces heat loss by radiation. Annual rainfall averages 61 cm (24 in) and is heaviest in the southwest and along the frontier between Norrland and Norway; the average rainfall for Lapland is about 30 cm (12 in) a year. The maximum rainfall occurs in late summer, and the minimum in early spring. There is considerable snowfall, and in the north snow remains on the ground for about half the year. Ice conditions in the surrounding seas, especially the Gulf of Bothnia, often are severe in winter and seriously interfere with navigation.

this info really help me in my assignments... hope that someday i could visit this country.

thank you very much
Annette
2
Lauren

I really like this info. it also helped me with my assignment of Sweden!
Thank you so so so much,
Lauren
3
Irish

Thanks for this info. This helps a lot, I'm going to Sweden this March and knowin the climate when I get there helps in what clothes to pack.
4
Alex

i've visited sweden before and it was totally awsome.
And thanks for the info, it really helped me on my assignments.
5
becky

this has a lot of information on it....it helps a lot.i visited sweden be for amd it was just like i planed :)
6
Serena

wow this site helped me alot with my HUGE project! Thanks!!! :D
7
Avery

Thank you for the info, it really helped alot for my Sweden project even though I live in Sweden :)
9
johnny

this is okay. I'm working on a social studies project for Sweden/
12
maria

thank you for the info great job on the one who wrote it!;) itreally helped me alot on my assignment!!
13
shue

thanx for the info..it really helps me on my sweden project..
14
Dakota

This info helped me alot on my assignments for school thank you. :)
15
Jessica

Thanks. THis helped me alot. I'm doing a project on Sweden right now. "Tack"!
16
katie