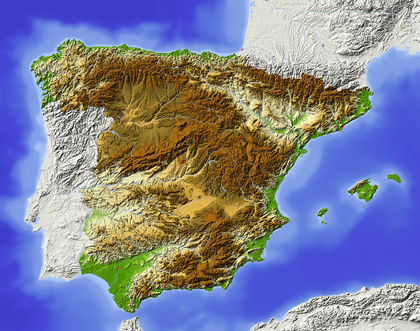 Continental Spain is divided into five general topographic regions: (1) The northern coastal belt is a mountainous region with fertile valleys and large areas under pasture and covered with forests. (2) The central plateau, or Meseta, with an average altitude of about 670 m (2,200 ft), comprises most of Castilla y León, Castilla–La Mancha, and the city of Madrid. (3) Andalucía, with Sevilla its largest city, covers the whole of southern and southwestern Spain and, except for the flat fertile plain of the Guadalquivir River, is a mountainous region with deep fertile valleys. (4) The Levante is on the Mediterranean coastal belt, with Valencia its chief city. (5) Catalonia (Cataluña) and the Ebro Valley comprise the northeastern region.

Spain has six principal mountain ranges—the Pyrenees, the Cordillera Cantábrica, the Montes de Toledo, the Sierra Morena, the Serranías Penibéticas, and the Sistema Ibérico. The principal peaks are Pico de Aneto (3,404 m/11,168 ft) in the Pyrenees and Mulhacén (3,478 m/11,411 ft) in the Penibéticas. The main rivers are the Tagus (Tajo), Duero, Guadiana, and Guadalquivir, which flow to the Atlantic, and the Ebro, which flows to the Mediterranean. The Duero and the Guadalquivir form broad valleys and alluvial plains and at their mouths deposit saline soils, creating deltas and salt marshes. The coastline has few natural harbors except the estuaries (rías) in the northwest, formed by glaciers, and those in the Levante and the south, created by sandbars during the Quaternary period.

The Canary Islands are a group of 13 volcanic islands, of which 6 are barren. They have a ruggedly mountainous terrain interspersed with some fertile valleys. Spain's highest mountain, Pico de Teide (3,718 m/12,198 ft), is on Tenerife. The Balearic Islands are a picturesque group with sharply indented coastlines; they combine steep mountains with rolling, fertile ranges.

This website is amazing. It is really helpful and explains stuff really well. I am doing a project on Southern Europe and I've used this website the entire time. Great for projects!!!!
2
Sam

I love this website, it gives more information than google!
3
haha

This helped me on my project for spain.Without this I would have failed.
4
j.o.

using this article to help me with a college admissions essay. thank you!!
5
carlssss :)

This was a GREAT source for my geography project on spain!!! love it!!!
6
Ally

This is a really good site. It helped me with my science project a lot. Thank you, NationsEncyclopedia! You made my project so much easier!
7
A high Schooler who doesn't wanna put his name

It helped me get an A- in my project, it wasn't a good grade because my teacher couldn't read my hand writing but none of the less, this website is very helpful I recommend it to anybody who need info about other locations.