The public sector deficit in 1996 was equivalent to 4.3% of GDP (compared to 3.8% in 1993 and 4.4% in 1992). Because of Spain's desire to enter the European Monetary Union, it had to meet stringent limits on its public debt and finances, including a 3% debt-to-GDP ratio. The government trimmed the budget by reducing the civil service payroll and limiting transfers to government-owned companies. 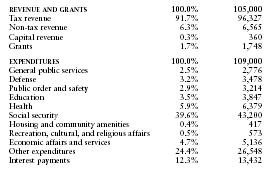