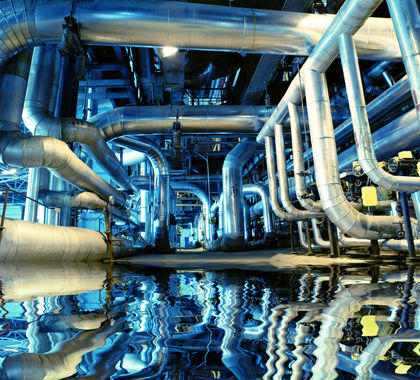 Industrial production grew by 1% in 2001, and industry accounted for around one third of GDP. The chief industrial sectors are food and beverages, energy, and transport materials. Chemical production, particularly of superphosphates, sulfuric acid, dyestuffs, and pharmaceutical products, is also significant. Of the heavy industries, iron and steel, centered mainly in Bilbao and Avilés, is the most important. Petroleum refinery production capacity at Spain's nine refineries was 1,294,000 barrels per day in 2002. In 2001, 2,849,888 automobiles were produced, a 6% decline over 2000; in 2000, 22,586 heavy trucks were produced an 11% increase over 1999. Automobiles are Spain's leading export.

Prior to the 1990s wave of privatization, government participation in industry was through the National Industrial Institute (INI), which owned mining enterprises, oil refineries, steel and chemical plants, shipbuilding yards, and artificial fiber factories, or through Patrimonio. As of 2002, Telefonica, Gas Natural, and the petrochemical company Repsol had been privatized. Industries demonstrating significant growth in the early 2000s were metalworking industries, due to increased production in shipbuilding, data-processing equipment, and other transportation equipment. Other growth sectors included food processing, medical products and services, chemicals, computer equipment, electronics, construction and security equipment, cosmetics and jewelry, and industrial machinery. In 2002, the construction industry was aided by such public works projects as a high-speed train link between Madrid and Barcelona, and an increase in property development on the Mediterranean coast.

thank you for having this site.. I NEED TO DO MY PROJECT AND THIS SITE IS THE BEST. thanks for having a comment area because i luv to comment.
2
happy

Wow this helped alot, I also need to do a project on spain, and this will get me full mark!! :)