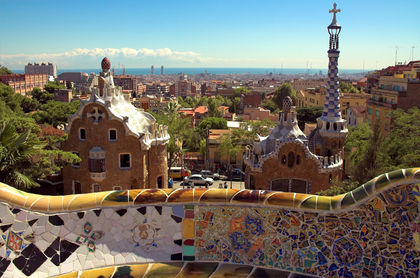 Extensive forests are now limited to the Pyrenees and the Asturias-Galicia area in the north because centuries of unplanned cutting have depleted stands. Fire eliminates 700,000 to 1,000,000 hectares of forestland each year. Government reforestation schemes meet with difficulties where sheep and goats graze freely over large areas. During the 1980s, an average of 92,000 hectares (227,000 acres) were reforested annually. Erosion affects 18% of the total land mass of Spain.

Air pollution is also a problem in Spain. In 1995 industrial carbon dioxide emissions totaled 223.2 million metric tons (a per capita level of 5.72 metric tons), ranking Spain 20th compared to the other nations of the world. Industrial and agricultural sources contribute to the nation's water pollution problem. Spain is also vulnerable to oil pollution from tankers which travel the shipping routes near the nation's shores. Spain's cities produce about 13.8 million tons of solid waste per year.

Principal environmental responsibility is vested in the Directorate General of the Environment, within the Ministry of Public Works and Urban Affairs. As of 2001, 8.4% of the country's total land area is protected. In the same year, 19 of the country's mammal species, 10 bird species, 10 types of freshwater fish, and 822 plant species were endangered. Endangered species include the Spanish lynx, Pyrenean ibex, Mediterranean monk seal, northern bald ibis, Spanish imperial eagle, Cantabrian capercaillie, dusky large blue and Nevada blue butterflies, and on the Canary Islands, the green sea turtle and Hierro giant lizard. The Canarian black oystercatcher and the Canary mouse have become extinct.

very useful site, i found some good things for my report! bye bye from AMERICA!
3
aubrey

wonderful. great article. it was very useful for me and my familia! :)
4
angel

very usefull. nice information.
that is what i really need thanks for your help men :D
5
katie

This is a really good website! I had to do this for my hw!!! And it has made it alot better!! I THANK U
6
rosalinda

This was really helpful for my report it has made my report so much easier thankyou :)
8
kyra

This really helped me with my project thank you for posting this information.
9
shayle

this website is helpful with a project i am doing! FROM CANADA
10
bobra/bertha

THAnk you so much it actualy helped a lot! I love this website!
11
patrick

good information, thank you very much...used in report from the northeast
12
Caroline

The problem of deforestation in Spain in very very serious problem. I am glad this article has taken the time to identify these problems. totes
13
trace

This was very helpful and was useful in my school project.
15
alysia brown

This really helped me with my school project!
ThankS!!!
17
Love

Thanks for all the useful information!!!
It helped me a lot~~
FROM KOREA
18
Graciana

Thanks for posting this! It helped soo much with my project on Spain! Totes awesoome!!
From, Graciana P.
19
a person

GREAT article, it helped so much with my homework. THANK YOU!!!
20
Girl who likes puppies

This was useful, but it didn't have what I was looking for. I mean, how does Spain resolve its ecological issues, other than replanting forests; there's other issues that you stated. In the end you just said the government fixed the issues, didn't specify. Thanks, and it really is a great article! In other ways it'll help with my report!