Tourism, remittances from Spaniards living abroad, investment income, and loans to the private sector have been the principal factors that help to offset recurrent trade deficits, especially deficits in merchandise trade and net investment income. Between 1992 and 1995 exports grew by 70% and imports grew by approximately the same amount. In 2000, Spain experienced a large increase in its trade deficit due in large measure to increased petroleum prices, the weakness of the euro, and decreased competitiveness.

The US Central Intelligence Agency (CIA) reports that in 2002 the purchasing power parity of Spain's exports was $122.2 billion while imports totaled $156.6 billion resulting in a trade deficit of $34.4 billion.

The International Monetary Fund (IMF) reports that in 2001 Spain had exports of goods totaling $117.6 billion and imports totaling $149.1 billion. The services credit totaled $57.8 billion and debit $33.5 billion. The following table summarizes Spain's balance of payments as reported by the IMF for 2001 in millions of US dollars. 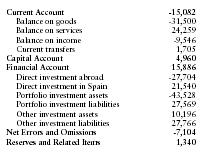